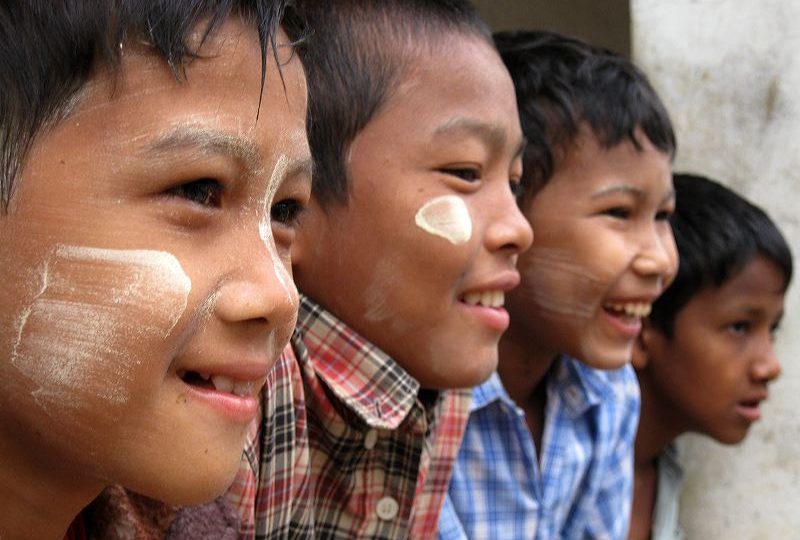 This project was a multi-pronged international effort and artistic collaboration to bring laughter to areas of Myanmar affected by the Nargis Cyclone in May of 2008. This project is 1 of 4 that took place in Jan-Feb 2009. A ‘Swedish’ and a ‘French’ group toured the delta area in parallel during the second part of January, followed by a ‘Belgian’ group in February. Each show was a collaboration and artistic exchange with equivalent numbers of Western and Myanmar artists. This entire project was spearheaded by the logistical efforts of CSF France, in particular Sebastien Bris. What follows below is a report by Moshe Cohen, from a US participant joined the ‘Swedish’ show, and then collaborated during the first part of the ‘Belgian’ show.

The Nargis cyclone in May of 2008 swept through the southern part of Myanmar creating unimagineable losses of lives and livelihoods. Our purpose in going there was to bring all the laughter and smiles that we could— in a positive atmosphere—and in a collaborative effort with Myanmar artists. We were fortunate to be able to reach so many places and share so many instances of mischievous delight. We were very well received everywhere we went; the monastic schools, the community centers and Training Schools. Our local partners took great care of us. The Department of Social Welfare were very supportive, and appreciative of what ‘the Clowns’ brought to Myanmar. It is unfortunate that we were unable to gain local authorization for the shows in the Labutta Township, and in one ward on the outskirts of Yangun. It reflects the severity of the political system at the time, however we were very fortunate to replace the canceled shows by taking up the performance itineraries—north of Yangon—from previous projects in its place.

As mentioned, this report reflects only a portion of the activities that are took place in Myanmar over a 6 week period. The whole project is a collaborative effort between 4 Clowns Without Borders organizations (France, Sweden, Belgium, USA), coordinated by Sebastien Bris. CSF France started organizing projects in collaboration with local artists with their first project in Myanmar, in 2004. This time, the CWB teams are traveling to Labutta and Bogolé townships, where the cyclone first struck land. The French team headed to Bogolé, and traveled with a Solidarité food supply boat to stranded villages, and performed more that 20 shows during their stay. The Swedish group went to Labutta (by WFP helicopter) to perform in 8 outlying villages and offer a two day workshop for educators/activity trainers in circus/movement and clown-mime/humor expressionisms.

As earlier noted, our time in Labutta was cut short, however we taught workshops to the NGO volunteers doing social work who took our place and conducted the workshops in the villages— we received reports that the games and activities were received with great glee in the villages, and the techniques were very fun and useful.

Even though the performing group didn’t receive local authorization to travel and perform, with the help of Unicef we were able to gather up children from Labutta group homes&local institutions and perform right there inside EMDH’s staff house in Labutta—in the large open sunny room on the top floor. We played 3 shows there for 400 children and NGO staff.

After traveling back to Yangon and renting a van, the following days we traveled up to Hpa An, Kaiytko, Mawlimane and Bago. We played in Monastic schools where families who can’t afford school uniforms and fees send their children. We also played in outreach programs for children affected by HIV/Aids (Care, Save the Children), a leprosy hospital, and several training schools for children. The training schools are detention institutions. We were very glad to have an opportunity to do shows for them.

The second part of my time in Myanmar, I joined with the just arriving Belgian team for 5 performances and independantly offered a series of workshops: a day for educator/activity leaders for EMDH, to children (with their activity leaders) in Child Friendly Spaces at Hlang Thayer Ward 7 (60 children,) as well as at Kabe Aye and Ma Li Kha Training Schools.

With Slyvain and Hemo from Belgium, and local artists May and Taung Zehn, we performed 5 shows. With multiple artists of different cultures, you have the opportunity to weave a very nice basket. Of the 5 shows scheduled, we were unable to play at once due to lack of local authorization, and one training school only brought us a fraction of the kids there because there was 9th and 10th level exam preparations

The two workshops with the kids though were very productive, the kids digging into the experience. The Belgian project continued after my departure doing performances in Bogole. Hemo and May then traveled to Labutta to offer workshops to the educators we had worked with. Sylvain, in parallel, teamed up with Soe Myat thu, the great Myanmar clown actor who played with the French team, and they performed in numerous locations around Yangun.

‘Swedish group’ The performance was created during two days of rehearsal at the Alliance Francaise in Yangun. The creation process was a collaborative effort with Moshe taking on the artistic director role in a nominal fashion. The show combined both Western Circus/Vaudevillian style antics and ‘numbers’ with interpretations of Myanmar dance and song. May, the youngest of the group (18) took on the role of #1 clown, being in charge, with Dave (Australia) jumping into the lowest position. Moshe took on #2 and Kalle #3. Theto and Emye, musicians and masters of improvisation, took a sideline role, Theto on percussion, Emye on Myanmar vibraphone.

The show opened with a little procession of the four clowns onto stage with stops. Dave not paying attention bumped into Kalle who bumped into Moshe who bumped into May, who got a little upset thus setting up the status roles. Dave was left on stage to take a balloon animal balloon, and after flossing his nasal passages, blew it up, and did a fake sword swallowing routine that May interrupted pulling the much larger Dave off stage by the ear. A series of circus skills based numbers ensued. Moshe and Kalle passed juggling clubs. May coaxed a scared Dave to walk through the clubs who then got so excited by it that he kept going on well past the time that the clubs stopped passing. A flower was then knocked out of his mouth while he stood in the middle. Moshe did a hat and sponge ball magic routine, Kalle did an egg routine that ended with Dave coming out as a chicken, chasing the egg man through the audience, then Dave blowing the rubber glove up over his head. Dave did a Diablo routine with May in a humorous supervising role. Moshe did a cigar box stacking and balancing number with members of the troupe traumatizing him with additional boxes and a glass of water (even Theto got into the act). Dave came out to play ‘Heartbreak Hotel’ on his ukulele in a falsetto. Moshe and Kalle on ukulele’s (that we all brought ukulele’s was a simple twist of fate) came into join him amping up the rockabilly side of things, but brought back to earth by May’s arrival with the directive to do the hokey pokey (Dave’s forte). We played and danced the hokey pokey, and with four volunteers dancing with us. A very fun number.

The show then switched into Myanmar gear, quite literally, with May distributing Longies (the traditional cotton skirt than everyone wears). The clowns had a distinctly difficult time putting the longies on: Moshe tried to put it on by slipping it over his head (rather than stepping into it), Kalle decided he needed a running start to dive into his, successfully, when room allowed, taking an extremely long (up to 100meters) run to have some momentum. Dave’s longie was a double length version in student color green which fit up over his head and more resembled a cloak of some kind. We all danced a traditional dance with the longies finally on until the music stopped and Emye came up to correct our dance postures. Emye developed and changed the number over the course of 15 shows, developing a very strong laughter filled sequence. When the music finally started again, it went from slow motion into way too fast time allowing the clowns to take the dance to absurd levels.

The show ended with the clowns singing a traditional children’s song “Sein o Zei’ with the audience singing along. In the Mon and Karen states, the ‘Sein o Zei’ was dropped as the kids didn’t seem to know it, and the show was readjusted to end with the Hokey Pokey, getting all the kids to sing/shout ‘Hokey Pokey’ at appropriate moments.

The show was a delight for all concerned, performers and audience, quite fun and funny. Length 60-80 minutes. ‘Belgian Group’ As Moshe’s participation with the show was brief, only four days of a much larger time period, he essentially slipped himself into the framework of a the show. The show was a more straightforward situation with Sylvain doing his magic numbers with a little assistance from May, and Hemo and May were creating a puppet story from scratch as Hemo’s shadow puppet performance was not feasible in the given working conditions. Thaung Zeng provided musical accompaniment for the shows. Moshe encouraged collaboration between the artists, offered advice to Sylvain, and encouraging Hemo with advice/direction in the creation of her puppet piece with May.

The workshops with educators, team leaders, and activity trainers (Labutta) was conducted in two parallel sessions, one by Dave and Kalle, the other by Moshe. The overall group was split into two, and each group worked with both sections for two half days. Kalle and Dave focused on games, movement and juggling (especially work with one ball) and object manipulation. They numerous activity games for groups that encouraged fun, participation, connection and collaboration. The object and movement work encouraged initiative and creative expression. Moshe focused on working with creative movement and humor-full expression. The workshops emphasized opening up expression through movement, gesture and voice. Constantly in parallel was the focus on opening up one’s sense of humor by applying it to movement and voice exercise work. Elements of mime and simple routines (box/tug of war) were taught, again with humor being the major parallel component. Playing status roles (leader, follower, goof) were explored in a follow the leader, bump line similar to the one played in the show. Emotional expression (fear, anger, being in charge) were explored/expressed through humor/clown exercises. Moshe taught a shortened version of the same workshop to EMDH educators/leaders/trainers in Yangun. He also taught six workshops with children applying these methods with the help/participation of activity leaders.