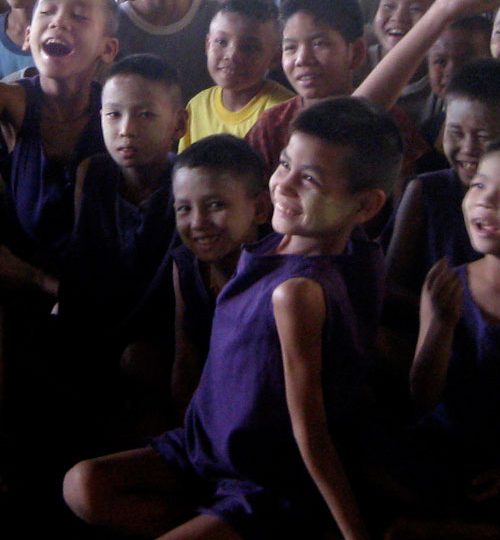 Moshe Cohen was the US artist in this project. Afterwards, he stayed on in Yangon to do 5 shows with the Belgian-Myanmar group.
At the same time he offered training sessions to Activity Facilitators who work with children in Training Schools and Child Friendly Spaces of disadvantaged areas. The training was similar to the delta workshops in focus, taking the work further by Moshe’s participation in AF activities in the field, thus providing hands on training.

This winter the international CWB push as all of last years groups are sending performances to Myanmar. Moshe Cohen will focus on working in the Training Schools, in Yangon and in Mandalay. He will be offering performances and furthering last year’s training with Activity Facilitators with more workshops and field trainings.

Last winter (Jan-Mar 2009) there was an international Clowns Without Borders push to bring laughter to the delta area where the Nargis Cyclone hit in May 2008. There were parallel Belgian, French, Swedish/US projects spreading out in different areas of Myanmar. Each group collaborated with Myanmar artists to create shows together which were then performed. The Myanmar-Swedish-Australian-US project brought together 6 artists to perform 18 shows and numerous workshops. In Labutta, the group offered a joint workshop to the Activity Facilitators and Social Workers of numerous NGO’s working in the villages affected by Nargis. The focus stayed on creating games, play, and fostering humorous expression with the children.

Just completed, Project Burma 2010 offered a two-fold focus on bringing laughter into Children’s Institutions and on training the activity facilitators and care givers who work in them. In partnership with EMDH (Children of the World), the only NGO working in these institutions, Moshe Cohen brought laughter and worked with children to open their expression. He performed for approximately 1650 children to great delight, laughter and open smiles.

This project follows up on the International CWB 2009 project in response to the Nargis Cyclone that brought Moshe inside two Yangon institutions in 2009. He trained the activity facilitators from EMDH to use games and clown /theater exercises to open up humor, individual expression, imagination and focus. Moshe then taught workshops in the institutions with the facilitators. This year Moshe pursued the same method and wrote a manual for the facilitators summarizing the work. Moshe will follow-up on the project with team leaders via email and skype in the coming months to gage how to continue developing humorous expression in the institutions.