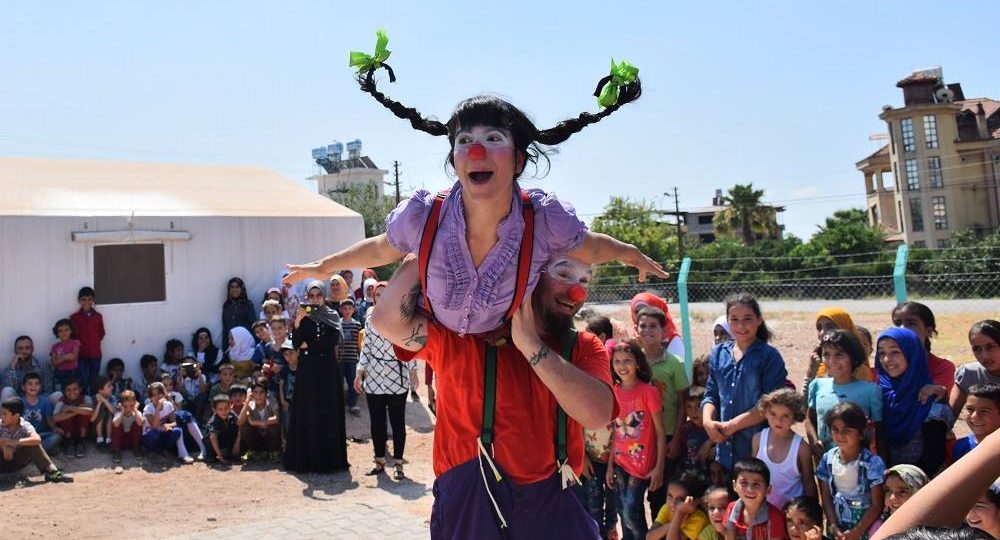 “We perform in villages, on the street, in community centers, under child-friendly tents organısed by NGO’s, and in refugee schools. Our audience is mostly Syrian refugees, and Kurdish, Turkısh and Persian-Syrian children.”

The attempted political coup in Turkey derailed Clowns Without Borders’ role in our 2016 tour. We were unable to determine whether travel in Turkey would be safe for Americans, and were deeply disappointed to tell amazing CWB artists Mike Funt and Justin Therrin that they would not go on tour. Fortunately, our Turkish collaborators were able to continue the tour and share laughter throughout Turkey.

Güray Dinçol, CWB’s main Turkish contact, has been working with us since 2015, and we are thrilled that he and his fellow artists were able to carry the tour forward on their own. These artists devised joyful experiences to help refugee children, and their communities, thrive within their new nation.

The UNHCR reports that  Turkey hosts 2.7 million refugees, many of whom come from Syria. The Syrian crisis has displaced 3.88 million Syrians since 2011. Clowns Without Borders’ relationship with Turkey stretches back to 2015, and has been shaped by the arrival of Syrian refugees and their need for psycho-social support.