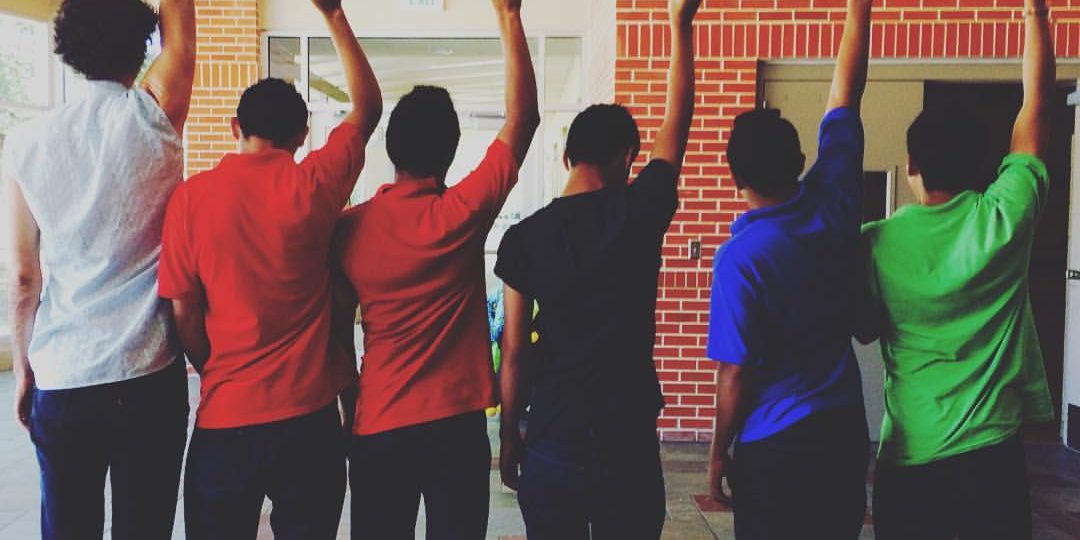 Is it possible to meet two strangers, get to know each other, put together a pile of musical and physical theatre acts, and perform for over 100 children, all in less than 24 hours? And for the show to be a hit? If you’ve been on a Clowns Without Borders project before this is, of course, something of the norm. But with this San Antonio mission being my first CWB experience, I couldn’t quite imagine how it would all come to pass in these initial stages, and especially not how well it would turn out!

The 5th was the arrival date, 6th was to be our creation day, and the morning of the 7th we would be performing our new show in full for all those in residence at St. PJ’s Children’s Home. The St. PJ’s kids are the same children who we will be teaching in physical theater and clowning workshops for the next two weeks. I had been the first to arrive in San Antonio and then returned to the airport to meet Sayda and Marisol. But, due to storms in New York, Marisol would now not be able to arrive until the next afternoon, adding an unfortunate delay to our meeting, but that doesn’t stop us from keeping a constant dialogue going on the show and the project.

After checking into our cute new home in San Antonio, Sayda and I talked, until travel weariness set in, over the project, theater, juggling, clowning, mutual clown friends, previous CWB experiences, travel, life, everything.

Waking up the next morning, the conversations continue and then we get the ball rolling on the show. The three of us had been tossing show and act ideas around for some time in online communication, but we needed to meet in person to explore and expound. It’s difficult to imagine the show as a whole without Marisol in person, so we focus more on developing possible themes and acts, keeping in communication with Marisol and slinging ideas back and forth as she travels nearer and nearer. Sayda has her ukulele, and I brought my sitar and musical saw, so we begin to work out a version of ‘Cielito Lindo,’ a classic Mexican folk song, with the uplifting chorus of:

Then, we start to brainstorm a possible duo act and settle on the newspaper routine, which Sayda had performed on CWB missions before, We phone our friend David for help remembering the nuances of the act, and it develops into a funny and sweet little routine.
Marisol arrives around 3 pm after a frenzied day of flight delays and changes. After some unpacking and lunch, we jump right into some games to warm up and then to show planning and don’t emerge until 11 pm (well, with one run to the store for all our necessary supplies). It’s bewildering how much energy Marisol has after a long night’s and day’s travel! Her energy helps snap us into action. Also bewildering is how the time flies as we’re all engaged in discussing the show, each other’s acts, each other in general, feeling out the potential for our characters and their interaction. We each choose a solo routine, I with my juggling, Sayda with her paper bag and invisible ball catching, and Marisol with her mouth trumpet solo.

The intro act becomes a fun little piece with a hat chase, a joke that writes itself on the incredible height difference between me and the gals (about a foot and a half), a limbo routine, an audience interactive ball throw, into a balance trick, and more.
Marisol and I work out another classic act, Dead or Alive, together, and add a little partner acro trick.

The musical saw lends itself very easily to a mimed operatic and weeping routine that seems to come out of nowhere, playing Ave Maria as Sayda and Marisol mime and act along.
Marisol leads a ‘copycat’ routine, where a volunteer will be brought up to copy our goofy movements, ending with a soccer ball being spun on their finger!

By the end of the first night, we have our show together! We have dinner and reflect on the process, all the things that could go right or wrong, and go to sleep satisfied with the day’s work!

Admittedly, I think we were all nervous to perform the show (Will they like it? Are we funny together? Will they laugh?) with such little time for planning and review. But, the show goes great, hoots and howls through the audience, and we’re all beaming afterward, an air of excitement all about as we begin the mission!!