Lesotho is also called, “the Kingdom in the sky”. It makes sense to me, because I hope this is what heaven looks like.

Before we left Maseru for Semonkong, we did a show for the SOS children. The youth we had been teaching opened for us, performing the life dream scenes they had created. After the show, the children formed a circle and we held hands to pray. Parliament, one of the older boys, led the prayer, “God, you should bless these people wherever they go. May their tables be full.” We said goodbye to our brave and talented SOS actors and hit the road.

Semonkong means “place of smoke”, referring to the smoke that comes off the giant waterfall hidden in the valley. We stayed in a rondovel at the Semonkong Lodge. A breathtaking place. Outside my window, I could watch ponies, boys on donkeys, flocks of sheep and baSotho people in colorful blankets walk along the path to downtown. People ride ponies everywhere as most of the dirt roads are narrow and rocky…to say the least. We performed shows everyday this past week at schools in and around the area.

What’s that saying? When life gives you lemons, made lemonade! 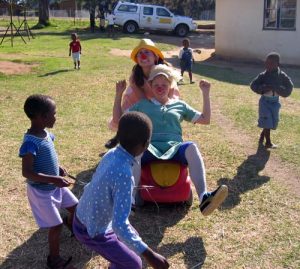 Tall Glass of Lemonade #1: On Oct 11, we decided to do a pony trek to a school tucked away in the mountains. A Lesotho pony is a couple hands smaller than a horse. I picked the smallest, furriest pony…boy, did I pick the wrong pony. I ended up naming him Lazybones! It was the total opposite of my first pony ride, when I rode like Zorro! Z! And as Jamie, Selena and James disappeared ahead of me, I realized that Lazybones was giving me a chance to admire the beautiful mountains and shepherds of Lesotho. I made a lot of lemonade that day…

Tall Glass of Lemonade #2: The show is pretty exciting for the children…especially when it’s a bunch of clowns on ponies. At the end of the show, in all the excitement, one little girl got pushed over. She cried and cried. I found her sitting on a pile of rocks around the side of the school. I rubbed her back, tried to talk to her, but nothing. She just kept crying and shaking. I put on a clown nose and she looked up at me. Then I put it on her. She stopped crying and smiled. Some kids sure make those noses look good.

We have become Semonkong celebrities! As we drive by in our clown truck, people cheer! It has been difficult to contact the schools beforehand so most of our shows are done by just showing up. One principal asked “It’s free? So what do we get out of it?” James replied, “Laughter and joy”. The principal said, “Good, we need it. A lot of our students are orphans.”

Yesterday we had a 4 show day! A rare and exhausting occurrence. The first two were for schools. The third was more of a clown improvisation show. Jamie stayed at the Lodge chatting with a “future contact” and James gave two teachers in town a ride back to their remote countryside school.. Selena and I decided to go along for the ride.

Tall Glass of cool, delicious Lemonade #3: When we arrived, one of the teachers, Mr. Marcel Senatla, told the student we were going to perform a show for the students. Surprise!! With nothing prepared, James put on a nose, grabbed his juggling balls and jumped in. Other highlights include Selena playing her Birim Bao and the class dancing along, James piggybacking a teacher and the removal of James’s boot, causing me to faint.

After the show Mr. Marcel talked to the class about our work, saying that we had heard a cry of need from their country and come to bring joy. He then gave me my seSotho name, Mamello, meaning “patience”. James was named Thuso, meaning “help” and Selena’s was Matsepo, meaning “promise”. As Mr. Marcel put it, “God must have patience, help and promise in order to bring peace to Africa”.

Tall Glass of Lemonade #4: Our final Semonkong show was at the Lodge, to thank the staff for their generosity. Show number was a gong show….but it all turned around when Jamie decided to run into the river during the chase scene. I hid behind the trunk…. As Jamie and Selena stood in front of the trunk, looking for me, Jamie “absentmindedly” dumped the water out of each of his boots behind the trunk and directly on my head….It was cold and muddy….but damn, what a funny moment! After the show, we danced with the staff, while the Lesotho sun went to sleep.