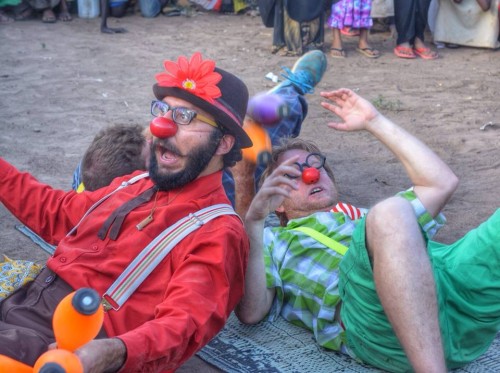 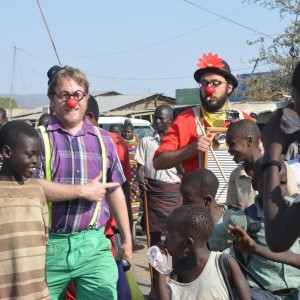 We pile out of the air-conditioned truck and into the stifling heat. We are on a fairly busy road close to one of the main food distribution points. Immediately people start staring and laughing at our strange clothes and red noses. Quite a few people are drunk and start hassling us immediately for money, food etc. One rather drunk woman sticks to me as I try and juggle and asks me to take her baby back to America. I try to explain that I’m not American, but South African, but she’s incoherent and not really listening. Maybe it’s the language barrier.

We parade up the street and start gathering a crowd of people following us. More drunk people accost us and ask us for money as we go. This is unusual. We haven’t had this many drunk people hassle us before, but for some reason in this neighborhood there are more than in other areas. We ask our escort after the show what this is about and they say that this area is known for brewing a kind of moonshine called Chan’aa (which means ‘kill me quick’). It’s no surprise that people want to dull their reality around here, but it makes us all a bit uncomfortable and we fear for our safety for the first time on the trip. We all keep an eye on each other while we lead the ever growing crowd down a side road towards an open space outside a church where we are to do our show. 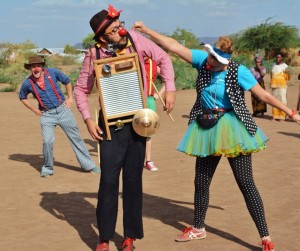 While our escort is introducing us in Swahili, we huddle and look into each other’s eyes as we do before every show. We discuss the fact that we might need to cut this show short, and if we feel like things are getting out of control we just move to the finale, then get in the truck and get out as quick as we can. We hope this will not be necessary, as these kids obviously need us. The show goes well though, and the laughter spreads quickly. Some of the drunken ladies who were bugging us during the parade insist on joining the show, and we give them their moment of fame.

After the show we are mobbed as usual and are saying goodbye, high-fiving and playing with all the kids who are now glowing and just want to touch us and say goodbye in person. I look over at Erin and motion that it’s time to leave. She has a worried expression and asks for help to leave. She has a baby in her hands who she explains one of the drunken women has put into her arms and walked away. She has been trying to give it back to the other women who was hassling her all the way through the show but she wouldn’t take it. Now she doesn’t know what to do. Luckily the first woman comes back and we manage to give the baby back and get out. It’s so disturbing that someone would want to give her baby away. (Although she says it is not hers and maybe she is telling the truth?) But if you think about it, the baby would probably have a better life if we did take it. But we can’t. There are just too many babies here, and it is not our place to take them with us. 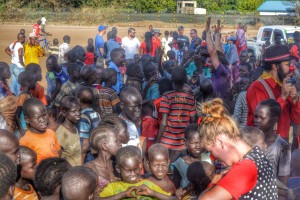 This reminds me of the show we did the day before at what was called a ‘safe haven’ for especially vulnerable unaccompanied minors. When we came outside after the show a Somali boy of about 8 years old just looked at me with very serious eyes and said ‘America’. I tried to explain to him as well that I was not American, but South African, but he doesn’t speak English and just keeps repeating ‘America’ with a very solemn expression on his face. This is the dream of everyone who comes here. But only 1% of them will be resettled in this way.

Life in Kakuma is tough. Re-reading this post makes me wonder if I should even publish it. But then I think about the smiles and laughs that we are bringing. It starts with confusion and possibly even distrust, but then we make a connection with one child who laughs, and that opens another child up to play with us, and so it snowballs, until we have hundreds of kids and adults laughing and for that half an hour, they forget the pain and are truly in the moment. We even see the clown magic working on the UN workers. One of them tells us he had forgotten what it was to feel happy; he has been here so long. We’ve also been told the transport office has had to reschedule who gets to drive us around, as all the drivers are asking for the opportunity to see the show. 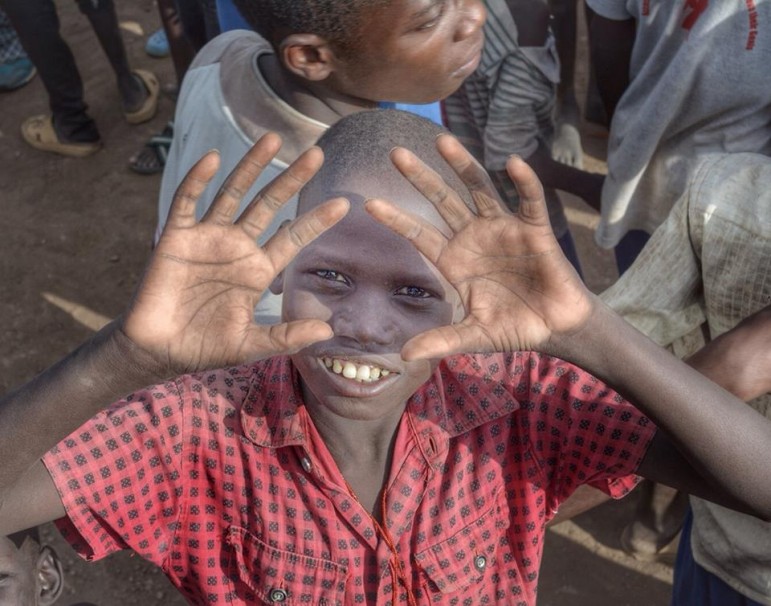