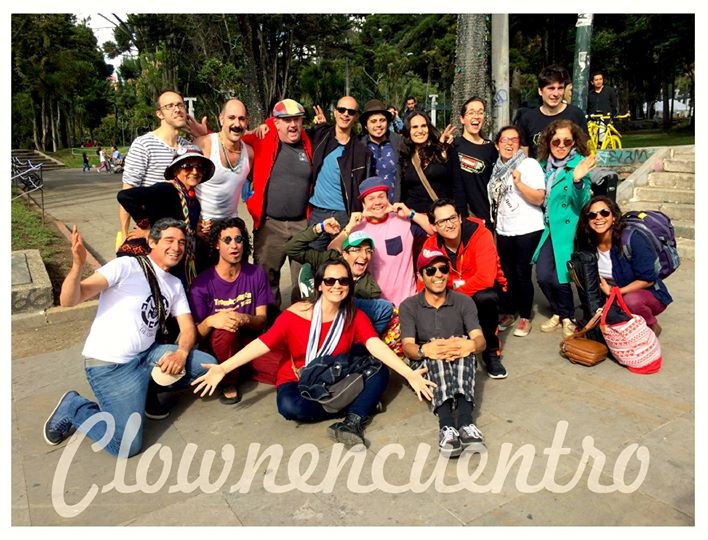 I flew into Bogota’ Columbia on November 1st at 12:01 am with more bags then any clown should travel with. I was met at the door by two of the most welcoming and wonderful people, a Peruvian woman named Fiorella and Pacho the producer of Clown Encuerto. This encounter set the tone for the rest of the week. I had 4 large bags three people and Fiorella’s bag to fit in a small 4 door sedan. While we were packing the car alarm repeatedly went off in the parking lot and the three of us laughed at the game of Tetris we needed to play with the packing of trunks and clowns. How many clowns and clown trunks can you fit in a small car? Apparently more then I imagined… It was a short trip to the hotel and I settled in for the night.

I woke up feeling only a little sleepy, and had the pleasure of meeting up with a new and old friend and collogue Frank Wurzinger & Barnaby King respectively. We took a walk and had a very nice breakfast on the Parkway of Bogota.

I began the week quickly; at 3:00 that afternoon I taught my first of a 3-day workshop. It was a delight. 20 students from many different countries eagerly awaited the work. The amount of work we accomplished in the 3 days was incredible; I believe this happens when working with dedicated and attentive students because there are no distractions, only work. I was assigned a translator -Catalina Del Castillo – without her there would have been no workshop. It’s amazing watching her listen to me jabber and then translate into Spanish. A very grateful thank you to her.

Later that evening, all the international artists convened on stage for a discussion on the art of clown. We all had similar feelings on the art we share but it was interesting to hear what everyone had to say on the subject. Again it was amazing to sit and listen thanks to Ilana Levy, whom translated for a full 70 minutes back and forth from English to Spanish. I feel set apart to be taken care of by such great people; it’s truly wonderful. Thank you!

The day began with a short rehearsal for the cabaret we were having that evening. We laughed so much this week! Being around like-minded and talented people is very inspiring and charged my artistic batteries. It only got better and better.

My second day for my workshop went very well. All the students are hungry for information. That evening at 8 pm we sold out the theater for the cabaret. Watching the talent on the stage was breath taking.

The evening had so many different worlds of clowning on one stage. What a treat to be a part of a show. I performed my 3-minute PB&J piece. 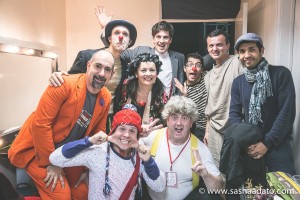 This day I started out a bit slower. The first activity I had scheduled was my last day of my workshop at 3 pm. The final day of the workshop was a success; I love that 12 hours of workshop only scratches the surface of the world of clown. Working with the students the past three days has been a privilege and delight.

That evening I enjoyed an all-Spanish very funny physical version of Greek theatre. The physicality was so well done that I understood the show without knowing a lot of what was spoken.

Today is the day of my show. All the nerves and jitters of performing my solo show in Columbia have thankfully waited till today to arrive. I loaded into the theatre around 1:30 pm for an 8 o’clock curtain. Just over 100 people came to the production of Journey of A Clown. I felt it was well received, and I had some great conversations afterward. Beto, the director of the festival, came back stage and the first thing he said to me was “It’s a tragedy, No?” I knew it was a different kind of clown show but I never thought of it as a tragedy. I believe he is right, it has evolved into a play about clown instead of a Clown show. 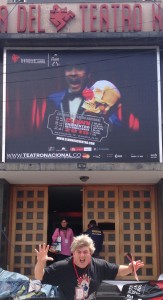 Thursday evening Daniel Lucas from Brazil performed as a mischievous clown looking for love. The performance was crude at times and his relationship with the audience was tested when he thumped an audience member on the head with his broom. We felt vindicated when a young girl was asked to give him his shoes she refused and when he insisted she threw them at him. It broke the tension from the thumped head. Daniel is doing amazing work in the poor regions of Brazil, much like Clowns Without Borders. https://youtu.be/iLDMP9b8Xds

Friday evening I had the pleasure of watching Beto Urrea work in long form improvisation. Beto created a scene by asking the audience to write down a place, profession, and action verb before the show and bring them into the performance. The use of the suggestions also suggested something. He mimed to the audience to make paper airplanes. Counted off, “Uno, Dos, Tres!” and we threw. My plane didn’t make it more then one row. I retrieved it crumpled it in a ball and tossed it at him, landing perfectly between his legs. This created a small scene including the twin towers, and it almost brought me to tears. Instead of the planes reaching the towers my balled up paper saved the day, even though it was fiction it gave me relief and joy. Thank you Beto, for rewriting history. https://www.facebook.com/CLOWN-ENCUENTRO-INTERNACIONAL-175882622499788/timeline

Saturday evening was wonderful; watching Frank Wurzinger perform was an absolute delight. Only knowing him for a week, but feeling a strong connection made the evening that much better. He talked about the how much confetti he used and how much of a mess it was going to make, and he left me wanting more. His justification of his use on confetti was wonderful and I would have helped him move a mountain of it if he decided to use that much. Thank you Frank! Sunday was a full day a street show in the National Park downtown Bogota’ from the talented and charismatic Antón Coucheiro. I went for a beautiful walk and a late lunch with new friends for life, Barnaby, Frank, Ilana, Fiorella, Herne, and Katherine. We then had a quick walk to the Hotel and the to the airport to begin the second leg of my trip in Cali with Ilana and the Cali clowns.

Out and about in Cali.