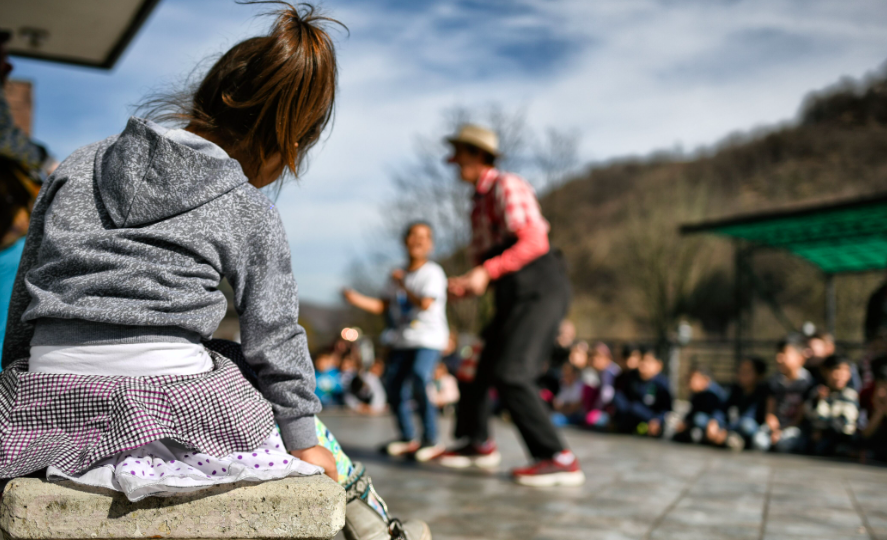 CWB – USA board member David Lichtenstein is on tour with Clown Me In founder, and longtime CWB partner, Sabine Choucair, and Dustin J. Allen. The three are traveling along the Balkan Route, walked by migrants from North Africa and the Middle East who seek refuge in the European Union. David’s tour diary gives a day-by-day sense of what it’s like to interact with migrants risking everything for safety and security in the EU.

Our final show in Serbia is at a large and intense shelter near Sid. The men and few families laugh really loudly. Many people here are Afghans or Kurds, and everyone has a story. Some people have made it as far as Slovenia or Belgium. One person ran a barbershop in Switzerland before getting deported and and trying the whole journey again. A 14-year-old Afghan boy, with scars on his head, looks very serious before the show. He left Afghanistan two years ago, and is alone.

We have two and a half great shows today, and then a seven-hour drive. It’s been 15 years since I last received a traffic ticket in the United States, even though I drive all over the West. But in two weeks here, we’ve gotten three speeding tickets! Two on me in Bosnia, and one on Sabine in Romania. And we’ve been driving slowly! #ClownsWithoutSpeedLimits

We have two shows over the next two days for Roma communities deep in the Romanian/Transylvanian countryside. These audiences are some of the rowdiest, loudest-laughing groups I’ve ever experienced. We parade through town, gathering a group despite the slight drizzle. We thought there was an indoor space, but the group just stops at a muddy intersection at the center of the community, and says, “Here!”

The rain lets up, and people laugh and yell so loudly. These people really know how to have fun and give back, and local musicians join us for some of the performance. It’s so much fun, but it’s not easy. The crowd is always in flux, and despite having a deep circle of audience members, a few cars and dogs push through. When we go to play with people at the edge of the circle, they all laugh hysterically and play right back. A town drunk repeatedly wanders onto our “stage” and so we keep guiding him off. We see a kid steal a large plastic beer bottle from his back pocket and heave it away into a yard. The kids are lovely and super fun.

We spend the night in between each show with a wonderful Roma musician family. They put us up in their big house and serve us wonderful food. They tell us that everybody in the community, except them, is unemployed. They live off the meager food they grow in their yards. They all speak Romanian, Hungarian and the Roma language. One of the musicians speaks French as well, and that’s how we communicate. The non-Roma people there, who are Hungarian, hate the Roma people and won’t join them as audience members. It’s quite an experience.

I’m on my way home, processing all the amazing Clowns Without Borders USA experiences in Bosnia, Serbia and Romania. Hundreds of immigrants live packed into a stinking warehouse, or squatting in an abandoned farmhouse. There are so many stories: “We left Syria 18 months ago”; “I’ve been turned back 15 times but I’m sure I’ll make it to Europe eventually”; “The Croatian police beat us and destroyed our phones”; “You see this awful warehouse? It’s still better than living in Afghanistan.”

We performed 20 shows for over 2000 refugees, and two shows in Roma communities. Our typical audience members were people fleeing Syria, Iraq, and Afghanistan, as well as other countries. Most of them have been on the road for a year or two prior to our meeting. These people spend their time trying to cross numerous borders, or resting in refugee camps (formal and informal). We clowned for toughened young men in their 20s and 30s, and teenagers traveling by themselves. They laughed like crazy. We did family shows for kids who spent the previous night in a police van. The Roma kids laughed so loudly, and aid workers told us they hadn’t seen the kids laugh like that in a long time. It feels very special.