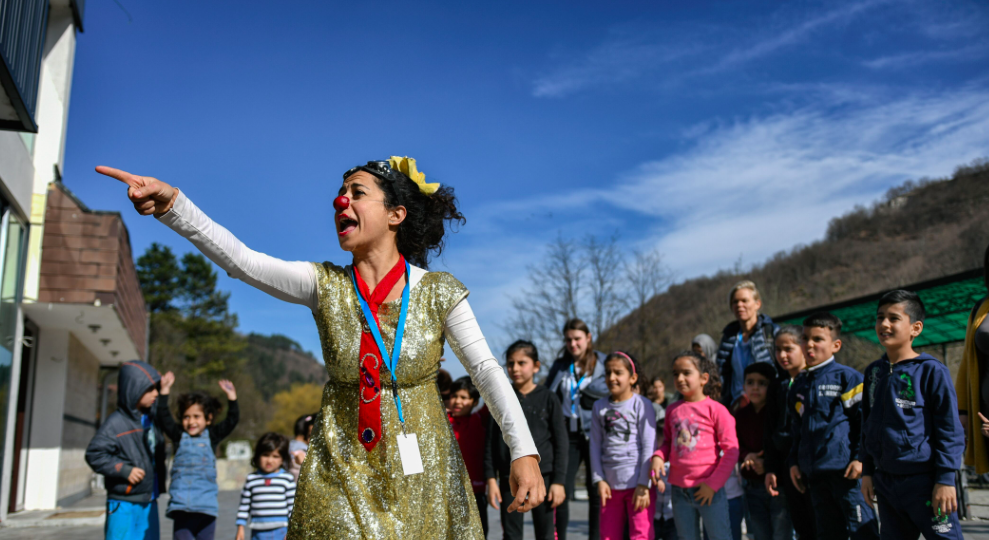 CWB – USA is on tour along the Balkan Route, traveled by migrants fleeing violence and persecution in the Middle East and North Africa. Sabine Choucair, longtime CWB collaborator and founder of Clown Me In, witnesses the different realities faced by children living through the dehumanizing European Migrant Crisis, along with their resilience and joy.

It’s our seventh day of performances, and we’re in Subotica, Serbia. David Lichtenstein, aka Leapin’ Louie, asks me, “Where are these families from?”

“Kurdistan and Iran,” I answer.

A little seven-year-old girl, who I can tell is super strong, looks at me and says in perfect English, “Oh, noooo. I’m from Germany.” Then she gives me a hug and asks me very gently, “Can you get me a princess car tomorrow?”

I hope that one day she gets her princess car and takes whoever she wants along with her to Germany.

We have a beautiful performance and workshop today for about 200 people. The performance receives lots of laughs and people continue arriving throughout. I’m struck by the kids today. One of them is barely two years old. She’s the most playful one and gets everyone else dancing. She’s in her own special world, doing her own thing. Oh…how I wish I could be in her world, and certainly don’t want her to come into our violent world.

There’s a boy with a harsher story. He’s 14 years old, acting like he’s 20, and living in a hotel right by the Croatian border. The hotel is filled with people from Afghanistan, Iran, Iraq, and even one from Lebanon. The kid is from Afghanistan, and he left home when he was 12 years old. He left alone, and he’s still alone. He’s happy throughout the show, laughing loud but wanting to act like an adult. I can’t help but wonder about the scars on his head from all the beatings he has received in attempted border crossings. I can’t help but wonder about bearing this kind of life—dealing with mafias and police, living the life of an adult when he’s just a kid. He’s waiting to be free, waiting to help his parents flee Afghanistan.

Today, I feel so humbled to share joy and laughter with him. Today, I can only think of one thing: This kid deserves to be happy and playful, and he shouldn’t be going through this.