Hannah Gaff and Leah Abel, along with Sabine Choucair, are currently on tour in Lebanon. For this project, Clowns Without Borders has partnered with Clown Me In and its related project, We Must Clown. On their first night, the CWB team watched a Clown Me In performance in Eastern Beirut. After that, they jumped feet first into tour prep.

Clown Me In has previously worked with Clowns Without Borders, but the We Must Clown cohort, which is made up of clowns from diverse communities in Beirut, is new to us. The group includes Palestinian, Syrian and Lebanese people, from a variety of socio-economic and religious backgrounds. None of them have ever clowned, and some have never performed at all. It’s not common in Lebanon to have people with such varied backgrounds working together to serve their community. Some of these clowns traveled from as far as the Bakaa Valley to come to the 20-something rehearsals that are part of the workshop process for this project. 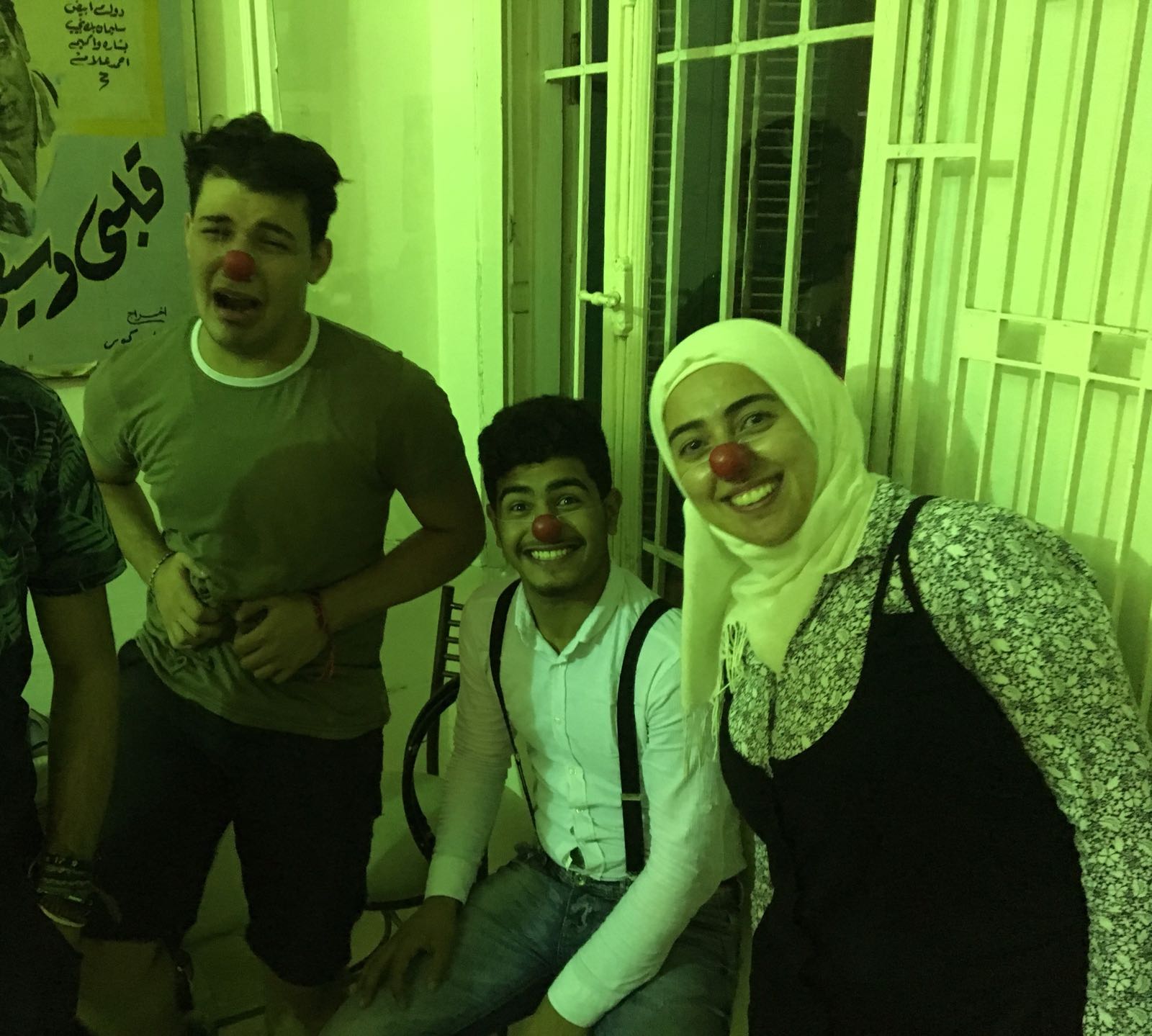 The Clown Me In group, led by Sabine began working with the 13 new We Must Clown members during the few weeks before CWB arrived, teaching them classic clown skills. Once CWB arrived, we dove into act creation! We also taught some classic Clowns Without Borders acts that we use in many of our shows around the world. Most importantly, we worked with the clowns to create acts that address some of the issues here in Lebanon, including noise pollution, garbage and littering, and the plastic surgery and botox trend in Beirut. One Clown Me In member described Lebanon as a “third world country with first world problems”.

Each day of the tour, we drive outside of Beirut to perform two or three shows in refugee camps and schools. We have a different crew of performers with us daily, including the CWB team, members of Clown Me In and one or more members of the We Must Clown crew. Part of the responsibility of each member of We Must Clown is to be our chaperone in their community by connecting us with local schools and camps, and accompanying us as we travel. We are so grateful to have some of the folks from the We Must Clown group to guide us! It’s wonderful to see them shine in front of their peers and community as they perform with us. The hope is that they will keep doing the work after we leave Lebanon. However, having a different group of performers each day adds a challenge. The show constantly changes and we haven’t scheduled any pick-up rehearsals throughout our one-and-a-half week tour.

After a long week of rehearsal, including finding and making props, we were so excited to finally start our tour! On day one, we went to two communities in a Palestinian refugee camp—one of which was the home for a member of We Must Clown. The first show had about 50 school kids, the second about 500 kids from the community. Both shows were a hit! After the second show we clowned with whoever was around. We frolicked through the streets, laughing and bringing joy until past sunset.

The second day we went to three schools, the first with about 300 kids, the second with about 500 kids, the third with 90 kids. The first show, the kids were so engaged and excited to watch the clowns, and see their teachers up on stage. The second show was at a very underserved school with about 40 kids in each class with one teacher. The kids were so excited, they couldn’t contain themselves. They jumped up and wanted to all be in the show. After some wrangling, we continued the show and everyone left feeling more upbeat. The final show of the day was at a school for kids with extra needs, including kids who are hearing or visually impaired, or have some sort of other physical disability. The kids seemed to really love the show more and more as we continued.

Overall, our first two days of tour have been amazing, with kind, inviting, generous and caring people welcoming us into their communities. We are looking forward to the days to come.