Clay is twirling a lasso, donning a Western hat, and asks for a volunteer.

The Haitian audience has heard this American word. But they’re not responding. After speaking with one of our local Haitian friends, Clay learns that in Haiti, the word ‘cowboy’ means a ‘bad ass’!

The word ‘cowboy’ was quickly dropped.

But when Clay says, “Bon Soir” this quickly evolves into a great bit. He calls out “Bon Soir”, and everyone shouts back, “Bon Soir”!. He says bon soir in a higher voice – so does the audience. Then in a lower voice. Each time they answer, matching tone and tempo beautifully. Even when he does it quickly, in a mumbled gibberish, they try to match it. Finally, he babbles in rapid fire nonsense sounds. The kids somehow keep up. It’s a great opener.

Chris does his mime piece with a suitcase. The kids laugh at how much he struggles with it. Eventually, it’s so heavy, he can’t lift it. He beckons a little girl to try to move it. She picks it right up like nothing!

Next, I’m up. I begin with “Bon Soir” as well. I figure that ‘call backs’ like this stitch our solo bits together in a small way. When the audience responds with strength, I visibly straighten up, ready to get them clapping along for a dancing juggling number. 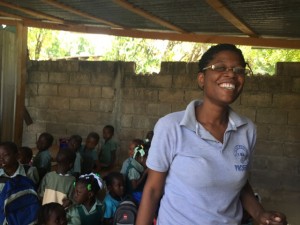 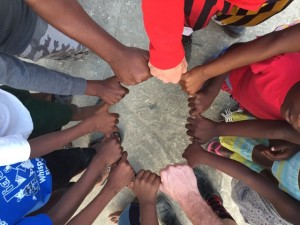 The Educator Who Understood Our Show Better Than Us

We were performing at Imagine Missions Orphanage, run by an energetic Haitian pastor, near Port au Prince.

We each do our solo bits, and then join forces on a couple of group pieces, which have been done in previous Clowns Without Borders tours. After the pastor sees the show, he thanks us for providing some good fables. Oh, really? That’s much appreciated, pastor, but you don’t have to flatter us by calling them fables! They’re just clown bits.….right?

For instance, I’m driving a tap-tap bus, and Clay finds a little kid volunteer in the audience, and boards the bus, putting the small kid on his lap. Chris then jumps on the back, and climbs aboard, just as they do here in Haiti. Ok, one difference – he’s not perched on a bouncing bag of charcoal, 15 feet above the rocky road.

Our imaginary bus lurches left and Clay leans the kid way over to the left. Then to the right.Then, as the driver, I take a cell phone call. I yak a while, as Clay and Chris get increasingly scared. Then the imaginary tap-tap bus loses control, careening toward the audience. The kids all scream! Our volunteer gets cheers and clapping for surviving the ride. The end.

The Newspaper bit has more gags in it. Clay tries to read Chris’s newspaper, and Chris keeps bopping Clay with it in a variety of slap-sticky ways. They chase each other around while I’m supporting the action with a quickening tempo on my flute. Then Chris pursues Clay right into the audience. They plunge in with such abandon that the crowd parts like the Red Sea. This gets even the quietest audiences revved up. As they climb over and around people, the audience starts going nuts. Clay hides behind someone, while Chris hunts him down. Another chase ensues! Finally, I separate the squabbling clowns, grab the newspaper from Clay, and rip it in two pieces. The wrong way. Each guy gets a part of the ruined newspaper. Like that’s any use! That last gag gets a chuckle from the adults.

However, when the pastor sees it, he tells the kids that this is a fine lesson in sharing. He speaks Kreyol, of course. We’re fortunate that Chris knows a few languages, including Kreyol, and translates for Clay and I.

Then he tells the kids the importance of safe driving. Speak up if the driver is on a long cell phone call!

Woah! it’s not just a goofy clown show anymore!  From now on, we add the Kreyol word for sharing, Pataje, to the end of our newspaper bit. We repeat it. Pataje.

I had been seriously thinking about axing the less funny routine, ‘tap-tap bus’ but not anymore. Not since Mr. Pastor has shown us another benefit in it. Now, I throw myself into it with more zeal, more committed to showing what could happen when driving distracted.

Workin’ it. Flawlessly. Well, not quite!

We have hit the ground running, banging out the shows and workshops. Typically, we leave right after breakfast, and rush to the first event. The responses to us are varied, but always full of smiles and laughter, and many of the little kids hug us at the end. Twice, they’ve watched us pack up the car, and ran besides our vehicle as we pull away. We eat a quick lunch, and then keep moving. We usually arrive back at our lodging around 6 or 7 PM. We feel like we’re making quite an impact, but at this pace, sometimes we forget things. Fortunately, we’re all good improvisers.

Clay has forgotten his lasso rope. Chris lost his towel. But I’m probably the champ in forgetting where I put things. Like my small recorder. Or the time I was looking for my phone at the guest house.

I asked Chris to call it. It’s always on vibrate mode. Fortunately, I heard it near my bed. I let Chris get back to business, and look around my bed. I was smiling to myself. Isn’t it funny how we use another cell phone to bounce a signal off some distant tower, or maybe a satellite in outer space, just to find something inches away?

The phone may have been inches from my nose, but after much looking, I can’t get my hands on it.

Reluctantly, I interrupt Chris again, who is busy coordinating our next event via text. He hits redial. My phone buzzes and buzzes. I looked on the table a 3rd time, I check the bed again, look under the bed, my backpack….

My smile is long gone, but my phone continues to buzz. I checked all my pants pockets for at least the fifth time, all while hearing the buzzing phone. For me, the buzz is starting to sound like a taunt. Then it stops.

We still don’t come up with it. Chris calls my phone yet again. Now Clay looks up from his own phone, and sees what’s happening. The buzz indicates it’s really close by. Now it’s teasing me and Clay, too. Chris hits redial. Yet again he sends radio waves hurtling through space to search for this nasty devil hiding under our noses. This time, I notice that what ever direction I turn my body, the phone still had the exact same source of sound. But before I put two and two together, Clay is tapping my smart phone: It was strapped to my back in my hidden passport pouch. Doh!