The school was just a few blocks from the Freetown football pitch, the Siaka Stevens Stadium, which was a refugee camp during the civil war and an international Ebola training center during the outbreak.  The students were between four and fourteen years old. They wore red and white checkered tops with dark green shorts or skirts. When we walked down the stairs, having changed into our costumes in the principal’s office a flight above, Eva and I quietly and deliberately played the show’s opening song so as not to scare the youngest children who sat in the front row.

The front row can be a dangerous place to sit in a clown show. For one, if you’re shy that is a prime location from which to get picked and brought forward on stage to participate. Secondly, and more seriously, sitting in the front row brings a risk if the crowd behind you gets into the act too much and pushes forward to get a better view. Already on this tour we’ve had to pause two shows to ask those in the back to stop pushing and leaning onto the little ones in the front. 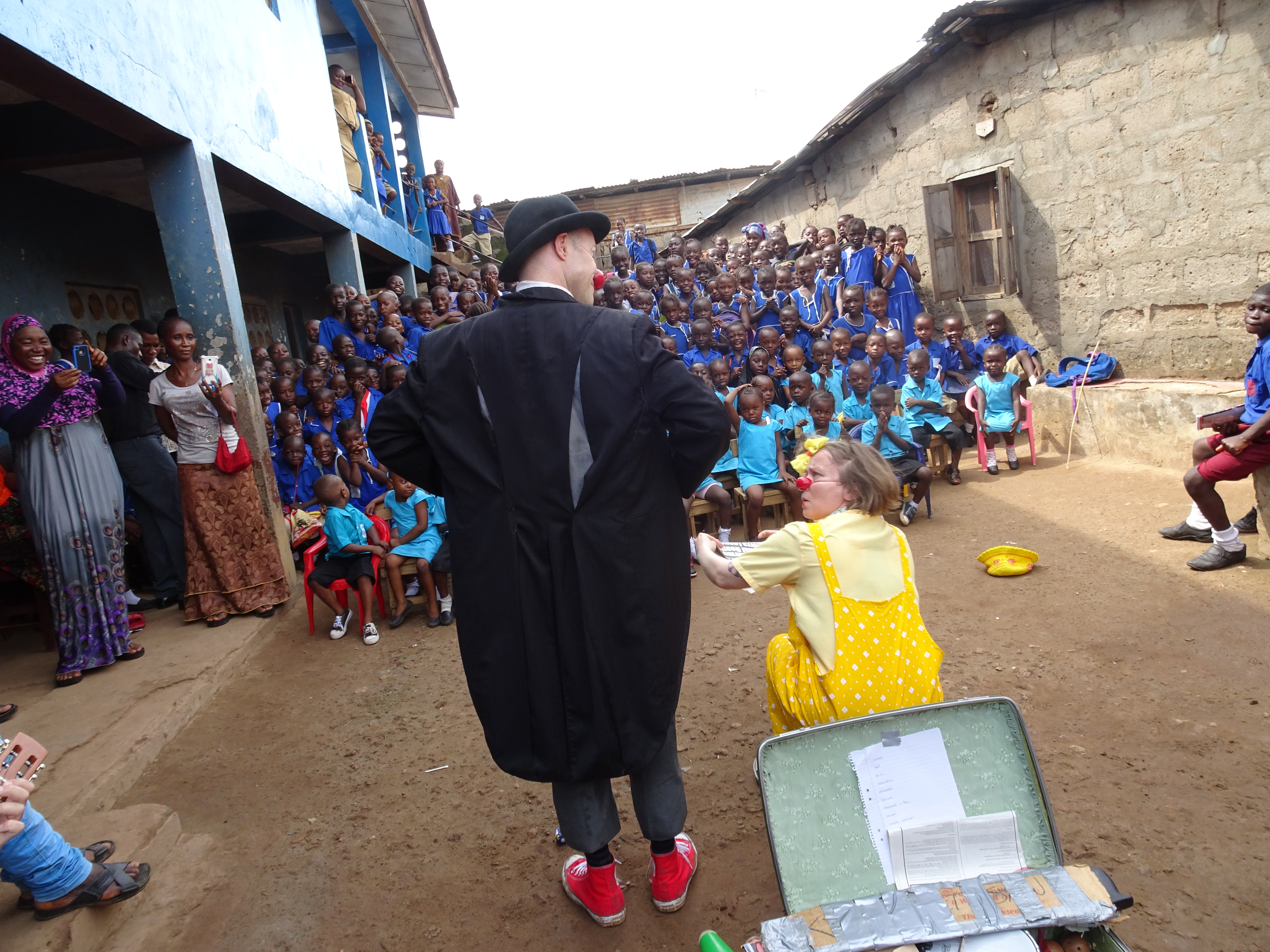 We came around the corner from the stone staircase and saw almost 300 children whose perfectly pressed uniforms were pressed as perfectly as their lips, literally pressed shut. Each child was holding his or her lips closed with their hands. Teachers whisper-spoke the words “quiet” and “don’t talk” rhythmically with the song. There was a constrained silence until Malin’s clown, “Apple” dropped all of the suitcases holding the props for our show—a teacher walloped and the whole audience released their mouths and laughed. 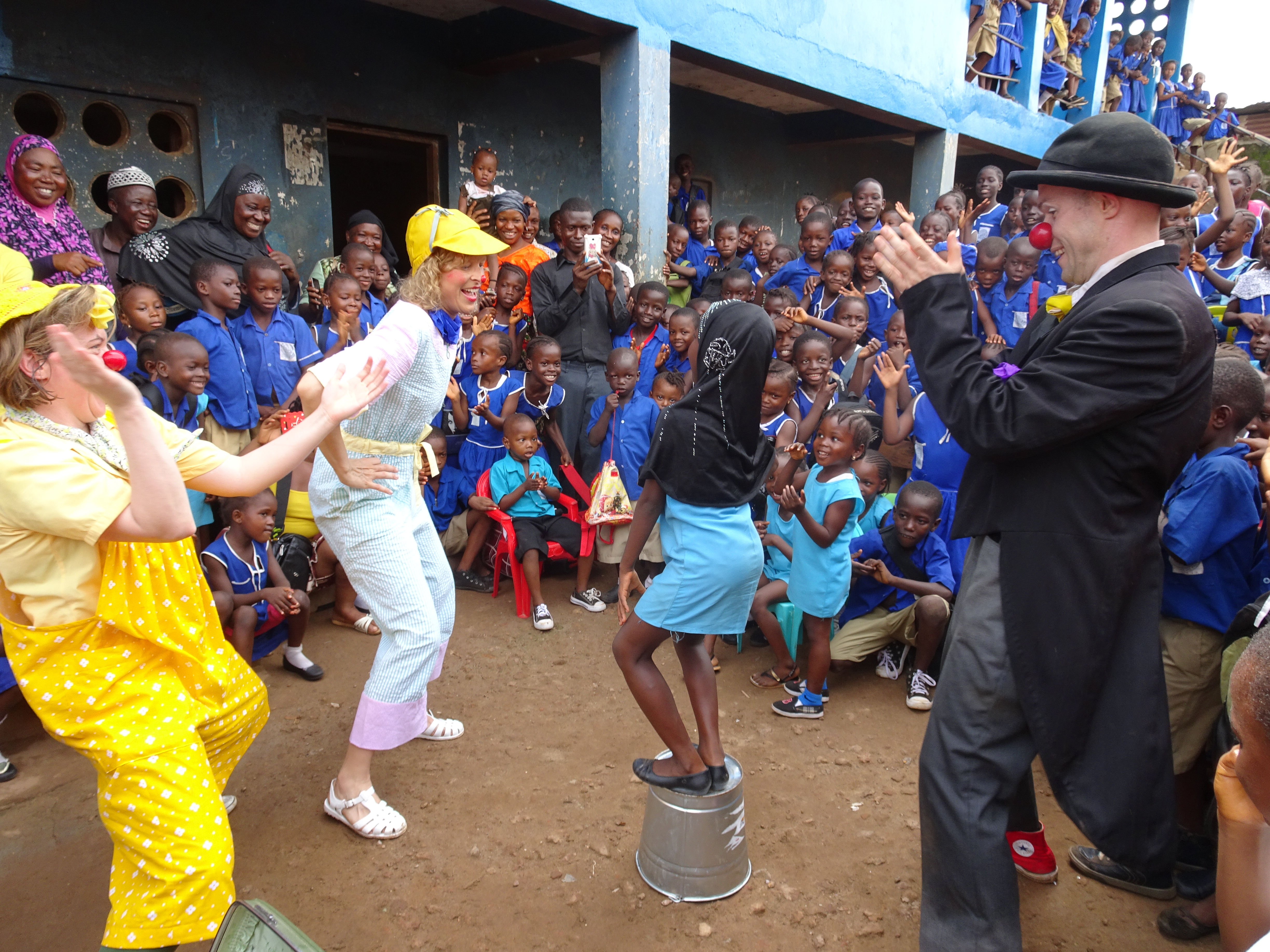 This was performance number five on our workshop/performance tour and it has been, by far, our best yet. Though many elements of the show’s choreography have been performed before in countless other countries and by CWB groups from a handful of chapters, this show now has a life and soul of its own. This was evidenced today by how the audience seemed to be able to predict what accident or pratfall would happen next, by how the audience, in self-selecting groups, picked and cheered for their favorite clown in our trio, and by how, like a tidal wave of red and white blurs, they undulated towards us to peer into the magical brown paper bag or away from us to avoid the wobbly musical saw when it was first revealed. Not a single small child in the front row was concerned about pushing from the big kids in the back. Everyone listened to everyone else.

We were truly all together, improvising with each other, child, clown and teacher. In the moments of laughter and wonder, we found ourselves all on equal turf.

At the end of the show, the school’s matron thanked us and echoed a narrative that we have heard frequently on this trip: “More clowns please. More shows please. You are welcome, here, in Sierra Leone. You are welcome at this school, anytime.” 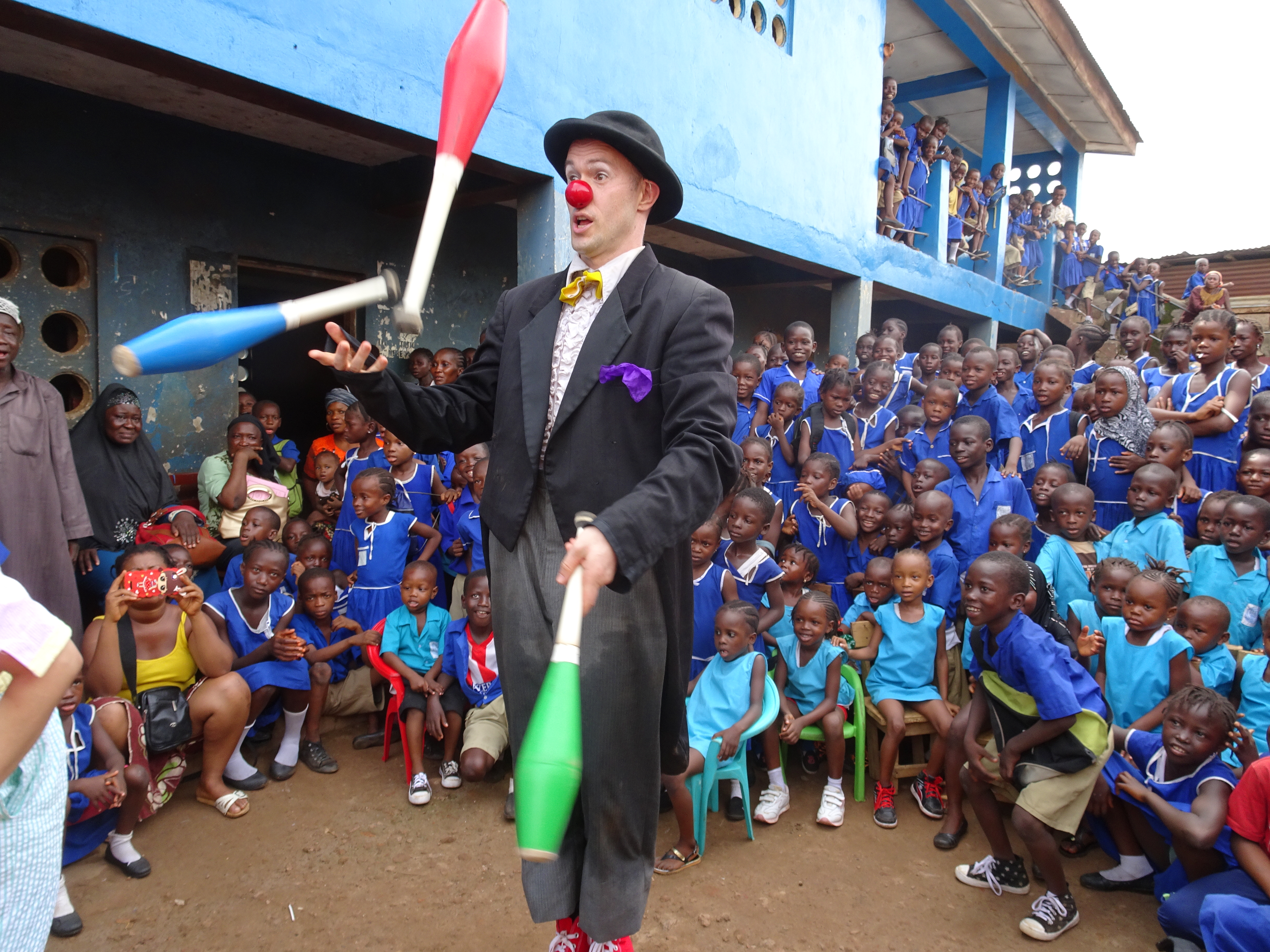