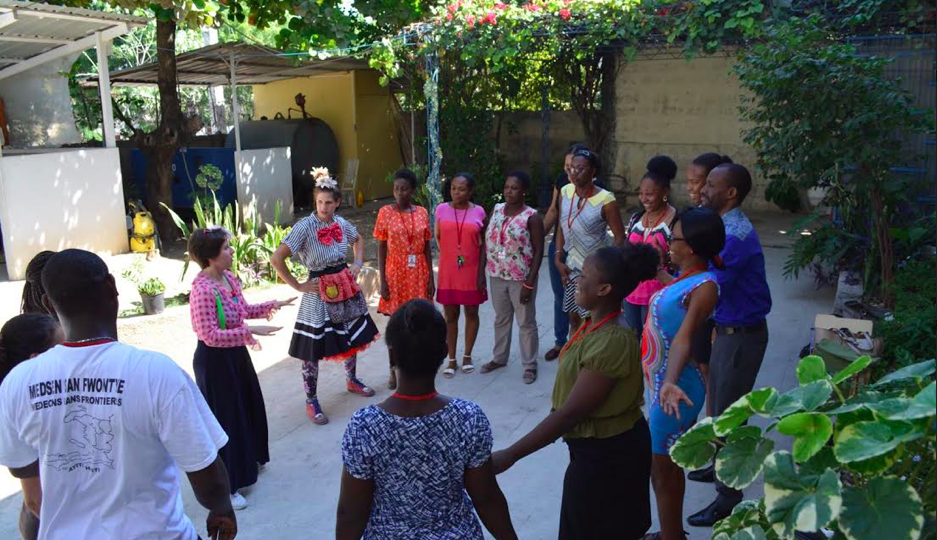 Geoff Marsh is currently in Haiti, along with Kaitlin Kauffman and our very own Development Director, Naomi Shaffer. For this special tour, we’ve partnered with Médecins Sans Frontières-France (MSF-France) and will lead workshops for hospital staff, as well as our regular performances for community members. In this blog post, Geoff reflects on the group’s arrival in Haiti, and what their first few workshops were like.

I arrived at Port Au Prince in the afternoon. The airport was bustling with Haitians and white missionaries, and I started a conversation with a few missionaries while we waited in the immigration line. Most of them have been to Haiti before, and were coming back to offer aid to those affected by the recent Hurricane Mathew.

I headed down the escalator to see Naomi and Kaitlin waiting for me. They were a bright beam of light, holding silly props which made them hard to miss. At that moment I knew I was going to really enjoy working with these performers.

We grabbed our bags and went out the front door straight past customs. We didn’t see our driver at first—in fact we actually walked right past him. Eventually we realized the MSF car was in the parking lot and our driver was patiently waiting for us, facing in the opposite direction. He even saw us walk by and did a great impersonation of Naomi walking past him.

Our ride to MSF provided a quick realization that we were in a country with few resources. In fact, Haiti is the 17th poorest nation in the world, and that’s out of 195 countries total. That’s pretty low on the ladder.

We arrived at the MSF hospital to find the mostly French staff waist deep in a makeshift pool to beat the 90-degree heat. We were immediately welcomed and shared personal stories. I figured I should make a positive impression on our hosts, so I taught them how to make a propeller out of rolling paper. They exploded with laughter and joy when their director picked up a rolling paper and spun in circles till she fell. We went to bed with smiles on our faces not knowing what we had in store for the next day of shows and workshops.

The next day, we woke up early to check out the out the performance spaces and to decide what we were going to do. Our venues included a small 5′ by 10′ waiting room, a long narrow pediatric ward, a field behind the hospital which we used to host a workshop for doctors and nurses, and a 10′ x 20′ intensive care ward with two patients in it.

The first show was confined to such a small space that we adapted the best we could to give the circumstances. Some of the kids in the waiting room had burns wrapped in cloth around their arms or legs and one kid had clothes tied to the majority of his body.

We were concerned about how quiet it was during the first five minutes of our performance, until the laughter of one little girl filled the room and cut the tension like a knife. I asked her to throw the ball at me and took it right in the face. Rolling with the punch I yelped out a childish cry and found the biggest guy in the waiting room to console my pain by blowing and wiping my nose on his shoulder. I could hear the rest of the tension release from the room as everyone let out a boisterous belly laugh.

We finished the show and was told that my dog puppet and props could not come in contact with more than one kid at a time in fear of spreading germs and disease to others. If a prop touched the ground it would be considered unsanitary and couldn’t be touched by anyone but me. Between shows, we promptly sanitized all of our props, and ourselves, to got ready for the next ward. 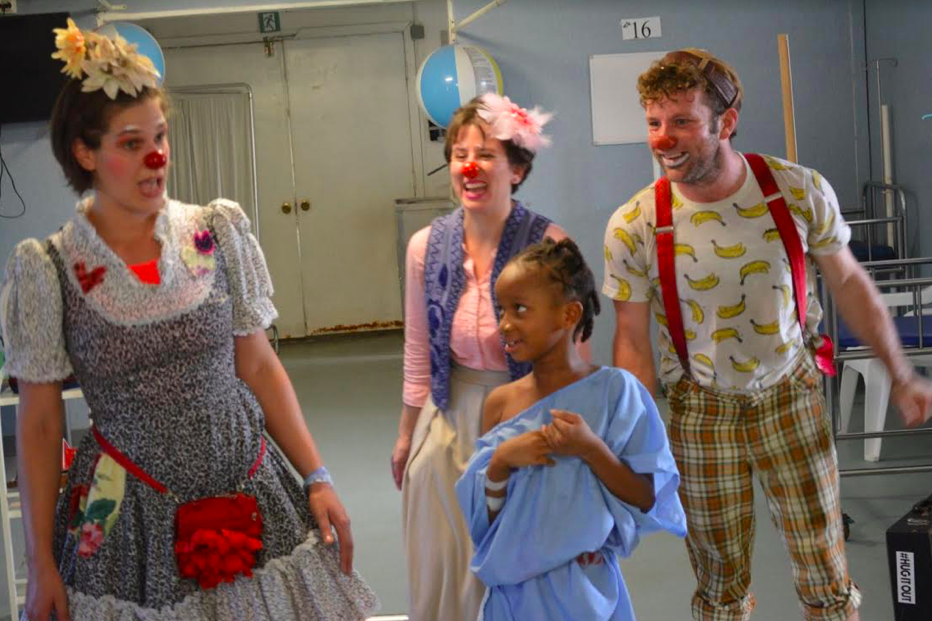 The next room was the pediatric ward. Kids and their parents sat in awe as we came in, not knowing how the stage was going to be set up. Luckily one of the male nurses came to the rescue and played along with us. He was a silly man and helped move the kids into a semi-circle. Young kids, toddlers, and nurses sang with us, played our games, and participated in our show.  They were less apprehensive than people in the prior waiting. One girl took a video of the plate spinning routine and watched it over and over again after the show. Though she was too shy to show me, I could tell she was excited about the whole experience.

We took a short break before meeting with 20 aid workers. We opened with a fun Improv game called Zip, Zap, Zop and broke into two groups for group juggling. After we successfully got three balls going, we incorporated our imaginations by pretending one ball was super heavy, another ball was hot as fire, and the last ball could not leave the ground and had to be rolled. It was a great exercise in listening and paying attention.

The next game we played was Pass The Face, where one person would do a movement or action and the rest of the group would mimic it, one by one. I don’t speak any Creole, so I was really excited when one of the workers caught on with what I was trying to teach and helped move the game along very smoothly. 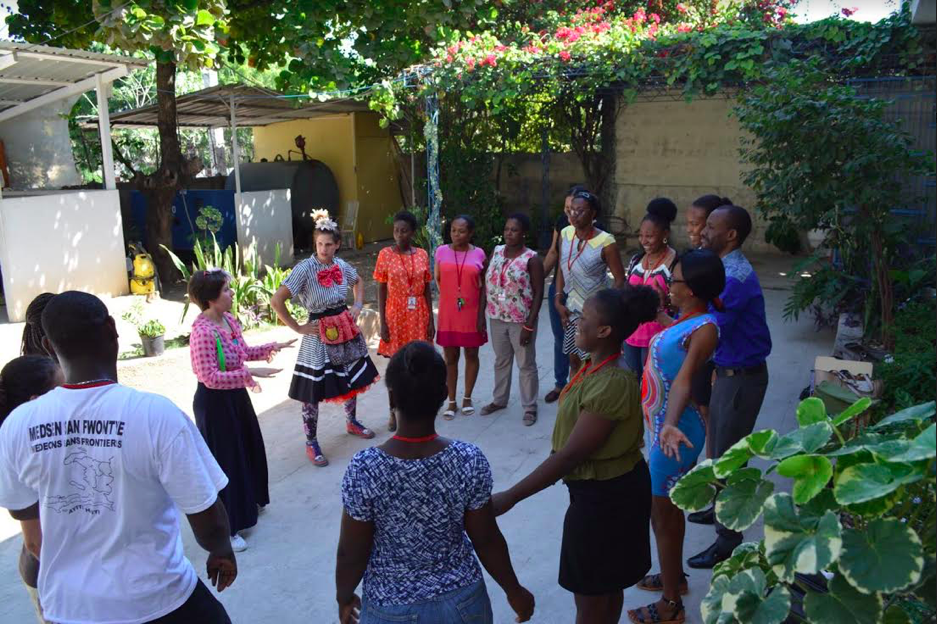 We split the two groups into whoever wanted to juggle and the other group would continue to play more games with Naomi. We walked around the corner into an empty triage room, and I was able to teach a handful of the aid workers to juggle plastic bags just as if they were juggling scarves. Their joy and laughter filled the room, as they became excited by each accomplishment and moment of progress.

Our last show of the day was in the intensive care unit, filled with two patients, one parent and five aid workers. One kid, who wasn’t older than nine, had burns over 50–60% of his body and face. The doctor told me he was in a propane tank explosion. The harsh reality is that almost anyone whose body is more than 50% covered in burns is not likely to survive.

As we entered the room I waved to the kid on the left and with a slow and painful attempt, he waved back. We sang silly songs, had fun with the stethoscope, and I juggled in the confined space as best as I could, giving it my all.  The show was short and sweet, probably the best show we did of the day because we felt more comfortable with one another. After our performance, the doctors and nurses thanked us and told us that after their own traumatic experiences, we had really helped them in ways we couldn’t see.