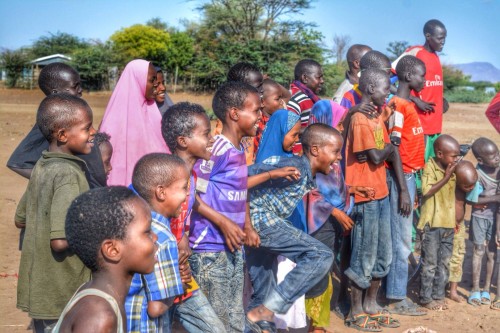 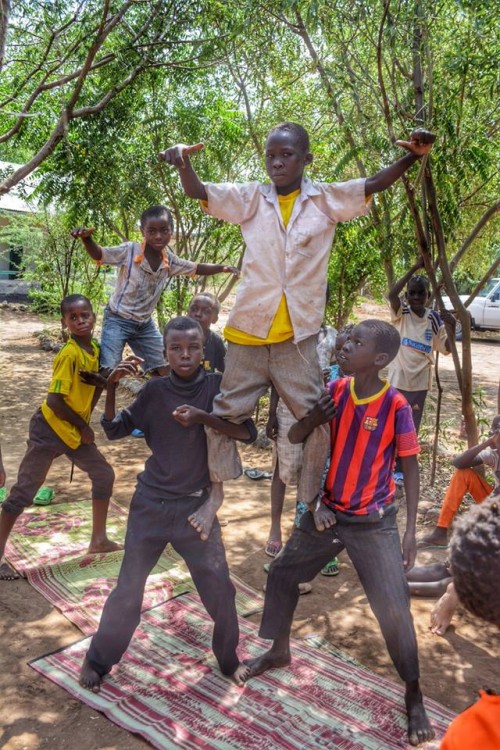 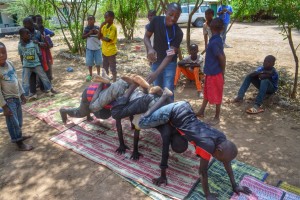 Today in our workshop we decided to throw the two groups together. the 8-12yr olds and the 13-20(ish) yr olds. We also took the class outside, since the classrooms were kinda depressing. This was not the best idea we’ve had and found out real quick. We had more kids from outside the program join in which was difficult because we only brought snacks and beverages for the allotted amount we agreed upon, the older kids thought it was childish that we were playing improv and imignary games and decided not to participate in fear of not being cool, and we kinda lost their attention after we gave them sodas. All and all at the end of the workshop it was more relaxed then the prior two 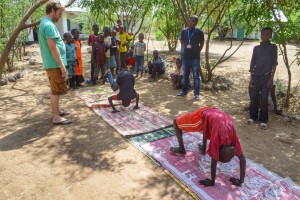 When we brought out the peacock feathers everyone to learn how to balance. they were so amazed that they could do such an amazing feats with just a feather. Balancing them on their hands, elbow, foot, and noses. Just then the older youth that were sitting off to the side for the entire class wanted to now participate . It was difficult for me to want to hand them a feather when all the other kids participated with our games and warm ups and they just sat on the side acting too cool to play along, we even had to tell the extra kids at the beginning of the class that they had to go since we didn’t have enough snacks and beverages for everyone. So here I am, thinking to myself “oh why not” let them have a little fun. After the class we learned that they stole 10 feathers from us.  It was a hard day for workshops and we learned a lot after discussing how things went at the end of the day. 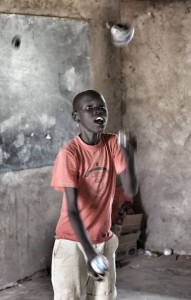 On the brighter side  we taught most of them to juggle, Built some awesome human Pyramids and even had a lot of the girls participate in all of the games. being a female in Kakuma is difficult and most of them stayed in a group and did not take initiative when given the opportunity. I got one of the girls to take the lead in the game “Go” and when the others saw how much fun she was having they soon jumped in to play.

We found one of the biggest challenges of teaching kids in Kakuma was improvisation. We don’t see them using their imaginations when given the opportunity to be free thinking individuals. We wanted to experiment with some fun fast thinking improv games which put them out of their comfort zone. Our translators were crucial in helping us describe how to play these games and we found that hey were having a blast playing “What are you doing”

We had no time to take our ritual after lunch nap since we were being split up and moved to the compounds across the street, the World Lutheran Federation (LWF) and the World Food Program (WFP) we quickly dropped off our belongings and bolted into the car to make it to Nasibunda Primary school. 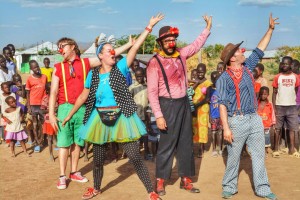 The show went really well. My favorite part of the day is when we parade though the local market and surprise the kids and adults that are occupying the camp. They never expect us coming. It’s truly remarkable to see these kids light up with joy when we turn the corner. This time we were able to record the whole show from Andreas’ GoPro mounted on the top of the car. I can’t wait till he pieces together a video for you all to see.

A fresh group of kids were waiting for us when we arrived at Horseed today, you could tell they were eager to learn and wanted to start right away. Gavin and I took on the younger kids and Erin and Andreas handled the older kids. We warmed up with a song. I’ve learned that these kids love to sing songs, especially if the words in the song are made up. Gavin has an abundance of great songs and activities that inspired me to want to pick his brain and teach the kids back home these fun activities. 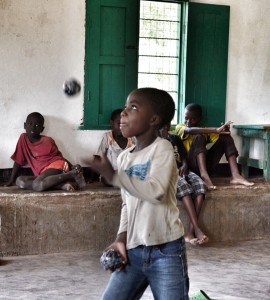 We were more on point with handing out supplies to teach the kids how to make juggling balls and this time we were more efficient and didn’t waste any materials and had them juggling up to two balls. Learning the local language helped teach the kids and showing them what not to do didn’t help since they were so accustomed to doing what we showed them and not what we told them. The idea of language barriers seems to slip our mind sometimes. It’s difficult but I enjoy the challenge.

We learned that perhaps 3 hours is a long time for these kids and I also learned that they are on a 500/day calorie diet. It was hard to succumb and give these kids soda as a snack but after 2.5hr of what we were doing with them, I’m sure they needed the sugar and the calories just to be able to keep up.

I was looking forward to seeing a kid I met a kid in the classroom next door all by himself. His English was the best I’ve heard from any of the kids, his name is Stanslo, he’s a 16-17 yr old Congolese kid who shared with me his story of why he is in Kakuma: His Mother was killed and his father went to with his relatives and soon was separated from his sons, Stanslo now lives in Kakuma with his older brother. I asked him if he likes it in Kakuma and he said “oh yes” I asked why? “because there is no tragedy here like there is was where I came from” Do you wish to leave this place? and he replied “If god wills it.” 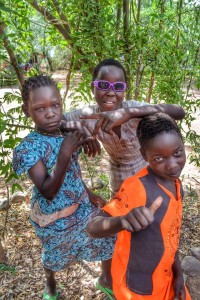 I felt like this kid didn’t have a wicked bone in his body. He was so polite and pleasant to be around. I knew he would have enjoyed the skills that we could teach him to help pass the time here while he waits for the opportunity to be resettled. After the class I ran into Stanslo and wondered why we was not there, he told me a woman chased him off saying that the class was full. I told him to try again on Monday. This time I hope he comes back and joins the class.
We got our nap in and we felt great! We made our way to Kakuma 4 which is the newest camp and has the freshest refugees occupying it, most of them from South Sudan. We had a small circle at first and then all of a sudden it was huge! Our resettlement friends from the UNCHR showed up to support us and it was great, we could use the extra boost since we were running on empty from performing and teaching everyday for 4 days straight. Our connections with each other are evolving very well, the bond within the group seems to be growing stronger and we are constantly helping each other with our acts, even when things go wrong. 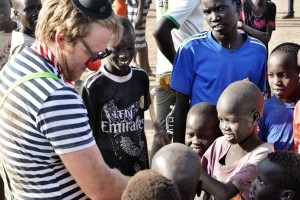 At the end of the show we figured that we would switch the order of the end of the show. Prior to today we would pack up the car with our props and say “Thank you very much we are Clowns Without Borders!” and have a meet and greet with the locals after the show. This left a weird quiet moment while we packed the car and then we said good bye. By switching it around and saying goodbye first the kids swarmed us and tried to take our props instead. We had to pull our belongings from their hands and we felt overwhelmed and stressed by the whole situation and only lost 1 Kazoo. 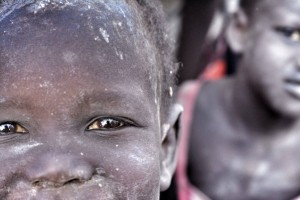 We just poured out our hearts to them and afterwards they wanted to take it all. Gavin made a great point and said that we shouldn’t let it get to us. They wanted to take a piece of us with them or learn how to do the cool skills with the toys that they don’t have access to. These kids don’t have much, large trucks would come and distribute free food and supplies for these families only once a month. Their food rations were cut by 1/3 since there having problems with over population in the camps. They even were given permission by the Turkana to increase the size of Kakuma by 1/2 to accommodate all the refugees that are coming here looking for help. It’s hard to not have anything to offer other them other then our show and skills when what the need most is food. Regardless, the work we are doing here is meaningful and our workshops are inspiring to these kids even if we don’t have much to offer in the physical realm. If we did, it would never be enough. A much needed day of rest will be waiting for us tomorrow to reflect on this last week.