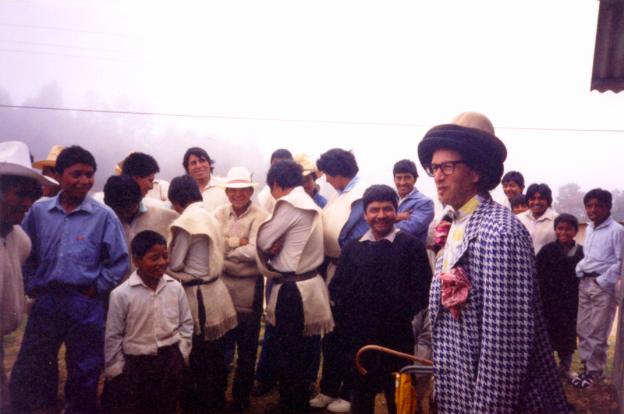 CWB – USA founder Moshe Cohen writes about the deteriorating situation in the Free and Sovereign State of Chiapas, in early 1997.

Chiapas is a unique conflict zone, as it is one of the few places where an indigenous way of life is in declared, organized conflict against the overarching state. When I arrive, I find the situation to be greatly deteriorated since my previous visit in March, 1997. Locals describe it as a “low intensity war.” In very general terms, rather than implement the peace agreement reached at the San Andreas Talks and write into law an agreed-upon charter of Indigenous Rights, the Mexican government has stepped up its military presence, intimidation, interrogation and harassment of communities. The government failed to intervene and stop the actions of the “white armies,” which are private ranchero-supported paramilitary operations, and sowed division between political groups like PRI and PRD. Government interference resulted in death and displacement for indigenous people and communities. I find the northern parts of Chiapas to be more of a war zone, and do not plan to travel in that area.

I overhear a conversation in a Mexico City airport bathroom between a big Texan man with a black briefcase, and a young English traveler. The Texan is telling how he was held hostage in a small town in Chiapas for a week, and how he eventually escaped by lying flat on the back of a truck bed and then being whisked away by a Pemex (Mexican State Oil) helicopter. I ask him who was holding him hostage and he tells me that “they called themselves Chaipan rebels but they looked more like farmers to me. But I wasn’t about to argue with their big machetes.”

If you are a tourist to picturesque San Cristobal Palenque, it might be difficult to detect any notion of conflict—unless you count the Subcomandante Marcos t-shirts and little Zapatista dolls sewed and sold on the streets by Chamulan women. These people are part of the landless community of Primer de Enero, located on squatted land bordering San Cristobal. Indeed, only when I travel to the communities and small towns, do I see army bases and convoys of trucks, personnel carriers and tanks with soft tires. Our performing group does its best to avoid any immigration police checkpoints, though they’re far more interested in “illegal” Guatemalans than they are gringos. During the tour, I travel with people from both the Catholic Human Rights Center Frey de Bartolomé, and people from Tadas, an NGO working with communities to develop income-generating subsistence programs (candle making, bread baking, raising rabbits, etc). The human efforts and determination of these individuals is very high.

The more time I spend around the communities and with people working here, the more I perceive the tension of the situation. At the end of my stay, I feel a strong urge to remain for several more months, and have the feeling that my actions are only a drop in the bucket of what needs to be done. I have no doubt that bringing in more clowns will open the pressure valves a bit. A traveling circus of Clowns Without Borders would be a great thing, and a safer way to travel in the northern parts of Chiapas. I don’t feel in danger, except perhaps when taking a combi (public transport VW van) between San Cristobal and Ocosingo.

Much Warmth and Beauty

Generally, the shows are very well received, even if in most communities they have never seen a performance. Most Western references are irrelevant, and what creates laughter is human interaction, simple slapstick, volunteer participation and sneezing disappeared objects out of my nose.

There is no consistency, as far as what would make people laugh, and thus I’m often searching for what might catch their fancy. Applause is mostly a foreign concept, as is typical audience participation vocal techniques. Big laughs though, when I get someone to respond to my “yoowhos.” More big laughs for the sponge ball routine, for trying to stand upright on my suitcase, for putting my hat on a community member’s head, and for my fake egg. BIG laughs for revealing my baldness and playing with it. No reference for juggling, though some think it was magic. Music is well appreciated. Language as a tool for humor is irrelevant, but use of words and sounds in relation to action is effective. The audiences always wants more and the kids swarm me after a show, full of curiosity. There is much warmth and beauty in the moments after the shows. I cannot say enough.

One great story is a radio conversation between the NGO Tadas and the community of San Vincente, about arranging for me to come and perform there. Eva, from Tadas, tells them about this payaso who wants to come perform:

Q: What is payaso? Is it a person?

Q: And what does this person do?

A: He makes people laugh, he does jokes.

This is the most extreme example, since most of the communities know what a payaso is and may have seen some in action at a fiesta. But most have never seen a live show. Some of the communities (Zinacantan, Tojolaval) seem more outgoing and humorfull than others. Invariably, it seems to be human nature to love to laugh. I thank all of you who brought in their support to make this expedition possible, and I look foward to the next opportunity to ask for it again.