Clowns Without Borders Project Colombia returns to Colombia in March 2011.

Casanare is a department located on the eastern plains region of Colombia, on the border with Venezuela. Since the nineties it has been subjected to massive-scale oil exploration and extraction by companies such as BP. This has had severe social repercussion for the communities of the area, causing extremely harmful changes insociety and culture.

The mission to Risaralda took place from March 5-10 in a rural outlying sector of the city of Pereira. We delivered 4 workshops for children who have been deprived of school, and 11 performances of our clown show, “First Step on the Path,” in the communities of el Chaquiro, la Argentina, Santana baja, Santana Alta, La Unión , La nueva Independencia, La Cima, Barrio Cuba y Barrio Mil Doscientos Lotes. The performance lasted 50 minutes and audiences loved it.

Some stories along the way:
In Santana Alta: when we began the performance we couldn’t understand why everyone was silent. By the end they wouldn’t let us leave, and that’s where we first heard the phrase that would become the phrase of the mission: “When are you coming back?” (Cuando vuelven?)

In Collegio Villa Luz, the principal wanted us to perform only for students in fifth grade or above, as only they would understand it. We used our clown powers to persuade him otherwise, and finally all the kids of the school enjoyed the show.

In El Chaquiro, the kids and teachers welcomed the nervous clowns with a parade of honor, and we performed with the most beautiful backdrop of mountains behind us.

PRIOR VISIT TO CASANARÉ – October 2010

During a recent trip, we conducted an informal survey of the area, performed some clown shows, and made crucial contacts with community leaders and local NGOs. Pasos de Payasos believes that this is a region in which clowning could significantly impact upon specific social issues.

We were struck during this trip by the beneficial impacts of our performance and workshops. The performances provided a means of social integration and interaction which they did not otherwise have. It brought people together who would not normally come together, and gave them something to do other than drinking alcohol.  While conflict is the underlying status of relations in many of these towns, during the period of the show, the community was taking pleasure in each other and in a shared experience of clowning.

In addition, the workshops were a great opportunity for the childen to play and interact together, and to accept an alternative form of communication to the world of facebook and youtube which dominates their lives. We considered this to be particularly important, to get them away from the computer, exploring the beautiful space in which they live, playing physically in their bodies, and learning to communicate both with each other and with us. 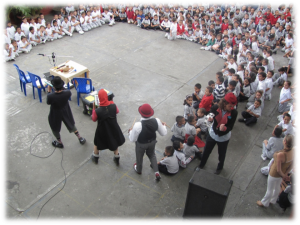 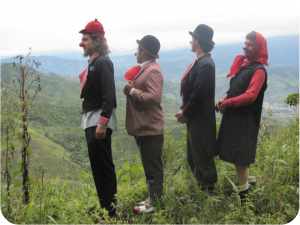