On tour in Myanmar, Leah Abel thought about the different ways humans capture past experiences and use them as references in the future. She wondered, “How do we remember so that we learn from our past, and positively impact our communities?” Oh yeah, and she asks: why do audiences love watching clowns play dead?

After a show in a camp for internally displaced people, I hear something that sticks with me. The camp population has been there for seven years after their villages were burned during armed conflict. Myanmar has been in conflict for over 70 years, since its independence—the longest recorded civil war in history. After our show, one of the leaders of the camp shares his experience with a local staff member from MAG (Mine Advisory Group).

“The show is very important for the camp because even though the violence happened in 2011, people are constantly reminded of the trauma they faced from bombings and being pushed out of their homes. The laughter is healing and necessary for relief from this trauma. It’s a way to move on.”

There’s a favorite Clowns Without Borders scene commonly called “Dead or Alive.” In our version, I trick Naomi into thinking I’m dead. Grief-stricken she wails and cries, and then seeks support from audience members. Meanwhile, I pop up behind her back, delighted by the nasty prank I’ve pulled. To be quite frank, “Dead or Alive?” is a consistent crowd-pleaser in communities that have experienced death.

As a social worker who thinks about the impacts of trauma, I often find laughter to be one of the best ways to bond, breathe, and relax. It brings communities together and lets individuals move emotions through their body without trying to ascribe reason to feelings and reactions. 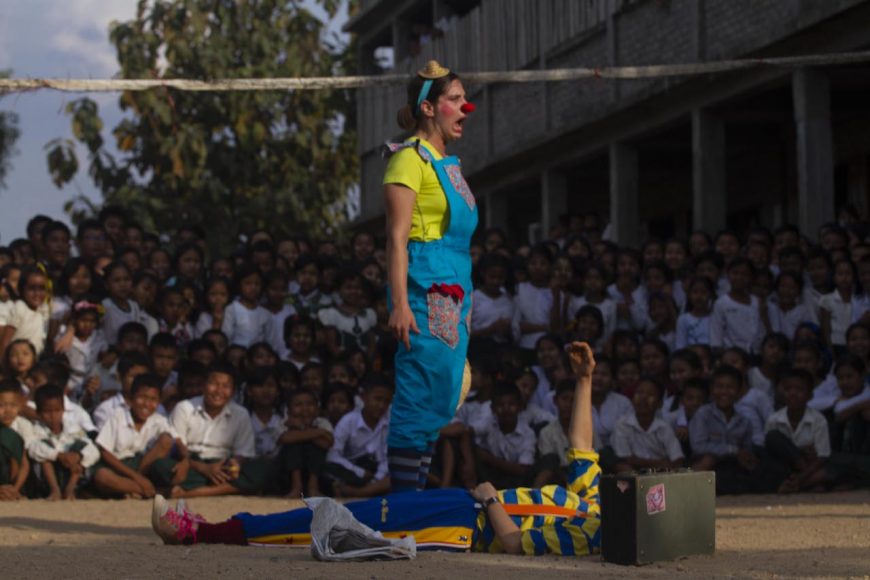 During one show, I see a girl contort her face to mirror Naomi’s. When Naomi cries, she cries. When Naomi’s face changes to confusion, so does the kid’s. I can tell exactly what Naomi is doing, because I can just look at the kid! And then she just bursts into laughter when she glances over at me enjoying my prank.

To bring this back to neuroscience: Mirror neurons are still all the rage in science and psychology these days. CWB puts some proof to the experience that when one person feels and shows something, others can feel it too. During clown shows, we see this over and over again. In fact, that’s basically the whole show. The audience laughs, cries, falls down, and experiences frustration right along with the clowns. And there’s more. We also see people laughing so hard they feel the need to squeeze, gently push or happily whap the person next to them. That’s my favorite reaction! I don’t know what science will try to say about it, but I know we’re having an effective show when a kid is so engaged they feel it all over their body, and that feeling comes out in a joyful nudge to their neighbor.