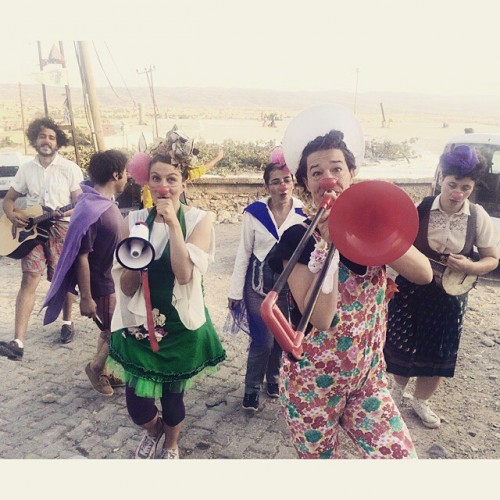 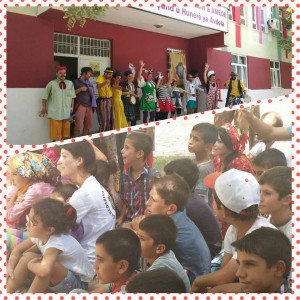 It is hot here. Everyday while we are working in Amed, the Kurdish name for Diyarbakır, I think of thunderstorms. The afternoon heat ranges from 99 degrees Fahrenheit to 107 degrees. We would have thunderstorms here if the air weren’t so dry. There is no humidity, no moisture at all.

The roar of fighter jets taking off and landing at the nearby military base causes the sounds of thunder in Amed. A member from the national press reached out to our group wanting to interview us about what it is like to work in eastern Turkey; they asked leading questions about whether we were afraid to be working in a war zone. Other than the occasional tank or armored police car and the afternoon and nightly serenade ofAmerican made F-16 fighter jets things are pretty normal here. In fact, our friends who are performing with us that live in this region take offense to the fear that the national and international media incites when it describes eastern Turkey as a war zone. Yes, there is violence in the region: the Turkish military is burning acres of forest where Kurdish soldiers are thought to be encamped and protests erupt nightly.

Things are tense, but life goes on. 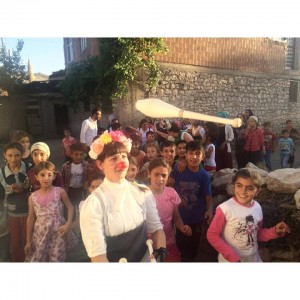 A group of Kurdish teachers, many of whom volunteer their time to teach at schools aimed at preserving Kurdish culture through the arts, through song and through dance, have asked us to share our shows in some very remote communities. We drive in our caravan of three large municipality vehicles and park at the schools, which have so far sat at the far periphery of the villages where we will perform. After meeting with local teachers and appropriate community mayors or elders we decide upon a place where we will perform. Often the stage is set in the road, or a playground of broken stone. We try to find a place that has some shade in which our audience can sit, but shade is elusive. Many of our shows so far have started in the morning or late evening because of the heat—no one in their right mind would come out of their cool homes to watch a clown show at one in the afternoon.

We open our show with a children’s song called “Zim Zim Zim.”Then our clown family begins it journey through a world of giants, acrobats, invisible walls, humans turning into animals and long lost friends returning. The kids we’ve performed for, about 1,000 so far, have been enthralled by the juggling and general wackiness as we parade through their communities to draw a crowd for the show. 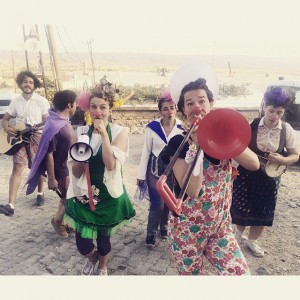 Clown is not all about laughter, wonder too is equally as important. At one of our shows in a small village called Nerib, I witnessed wonder that trumped even the loudest laughter. Nerib is flanked by rugged mountains sparse with shrubs, the village is ancient, it’s history hard to ascertain. Rumor is that within the village are two very different political ideologies, one of which has been reported to be extremely fundamental and perhaps violent. After Sarah and our leadership team sat with community elders to get permission to perform in the village, the team decided to play the show by the school, a neutral section of the community. The roads are not safe to travel after dark, but the afternoon sun was too hot to perform. So after we decided to perform at the school, we waited just long enough for the setting sun to cast a shadow over the school and its east-facing wall. There was a slope of rubble about ten feet high at a 45-degree angle that made for perfect “stadium seating.”

We played, worn from the heat but energized by the children–rowdy boys in the front who were dying to join us on stage, comparably energetic girls in the back chattering about the weirdness going on. In the middle of the crowd sat a young girl in shorts and a pink t-shirt, her feet dug into the rubble so she would not slide down the slope. She leaned forward watching the clown mayhem in front of her. She laughed and smiled just like her friends around her. Then the stilt act began.

We call it “Tall Land.” Three clowns enter the stage on four-foot tall stilts. Each clown is holding a golden piece of cloth, gently waving it in the air. The band, consisting of a guitar, ukulele, and musical saw, plays a flowing and ethereal tune. For a few moments the show slows down and all eyes turn upwards. The clowns dance together and one clown lifts another on the stilts and they slowly turn like a newly wed couple. A clown, not on stilts enters and desperately tries to get the attention of the other clowns high up. When he does, these giants run in fear like an elephant unnerved by a mouse. The piece concludes when the groundling clown and the stilt walkers realize there is nothing to be afraid of and they can dance offstage together.

When the stilt walkers entered, the girl’s jaw dropped. Her eyes widened and for the first time in the show, this child in the pink shirt stopped laughing. A subtle smile creeped up on her face as she reclined onto the rocks. She placed her hands behind her head, mesmerized. She looked calm and at ease watching the clowns and the blue cloudless sky as a backdrop. She followed the tall trio with serene attention, move by move and when they exited the stage, she slowly sat up as if waking a dream. The sun continued to set behind her and the mountains grew dark. Soon we would hear the fighter jets starting their evening patrols. But in this moment, everything was just right.

Even in states of war, there is space for wonder. Both are transient, both life changing. 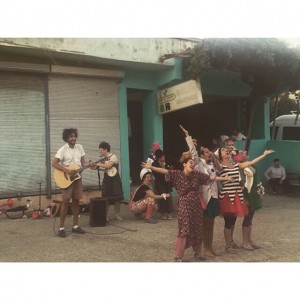 The children saluted us with hugs and high-fives after the show. Some said “space” which is Kurdish for thank you. We rapidly packed our vehicles and left town before it got too dark to travel.

When this tour began, our contact here, who also works as a music teacher, told us that our clown work is part of the resistance to this “situation of war.” Despite all that is being reported in the news, despite the tension in the region, life moves forward, children continue to play and the arts can thrive. We hope that we may continue to play a small role in safely encouraging joy, laughter and amazement.