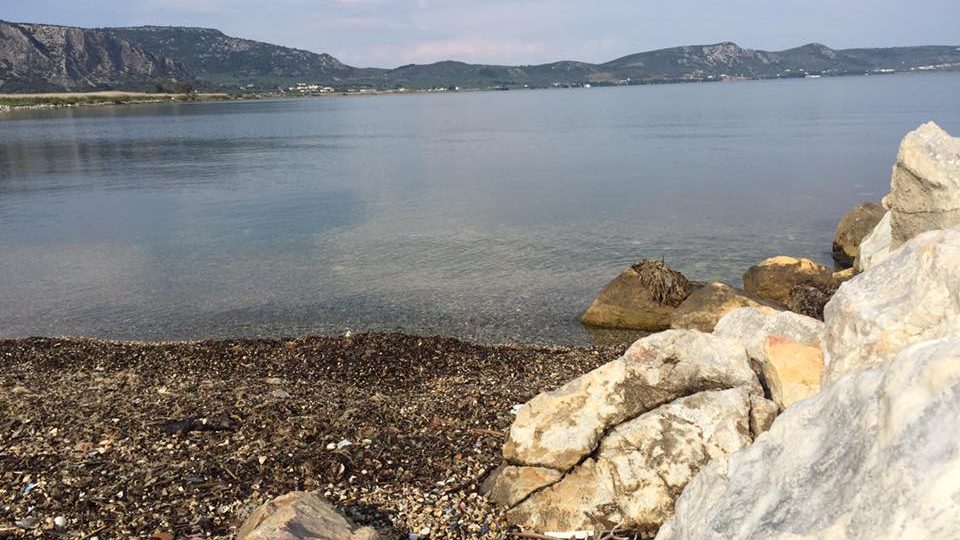 Balkan Route 3: Back In Lesvos
In the final week along the Balkan Route tour, Clay and Sabine returned to the greek Island of Lesvos. Clay and and Sabine performed in Lesvos with CWB on our previous projects. In 2015, when we were first in Lesvos, the island was at the center of the new cycle. Now, it is less common to see the pictures of life rafts along the shore. While the news has changed, the reality for many refugees has not.

Though Lesvos is the beginning of the “Balkan Route,” and the quest for European asylum, it is not the beginning of refugees’ journeys. Clay and Sabine share their reactions to being back in Lesvos in their own words.

Clay:  The beauty of today brings tears to my eyes. One eye of sadness, the other of joy. It’s been 2 years since I’ve been to this well run refugee camp on the island of Lesvos. Here, an intimate community of diverse humans from different countries cook and play together. Last time I was here thousands of refugees were pouring through the island on their way to a better life in well-to-do Europe. Now the flow is down to a trickle. But on the bright side only 30 drowned the other day instead of the hundreds that did while I was here last time.

The flow has only stopped because of the squeeze of xenophobia from foreign nations. Hopeful families are sent back to Turkey where resources are scarce, and they still feel afraid for their lives. All I know is I hugged and played with wonderful intelligent resilient children all day long. One boy from Iraq with imbedded anger punched me in the face at one point. Pretty hard actually. But I just gave him more love and attention for it. He rode on my shoulders for a while, we played a robot game we made up, and I held him tight. By the end we were best friends.

I feel as if my arms are tied to trucks of joy and pain pulling in opposite directions. This is hard wonderful work and I wouldn’t trade it for anything. It feels so right to be here. I want so bad to have a superpower that shoots out of my fingertips and eyeballs and engulfs the world in this warm light that easily forces everyone to understand and care for each other. But all I can do is play this little instrument and fall on my face for a few laughs at a time. Don’t get me wrong, it’s extremely powerful. The ripple effects are unimaginable. 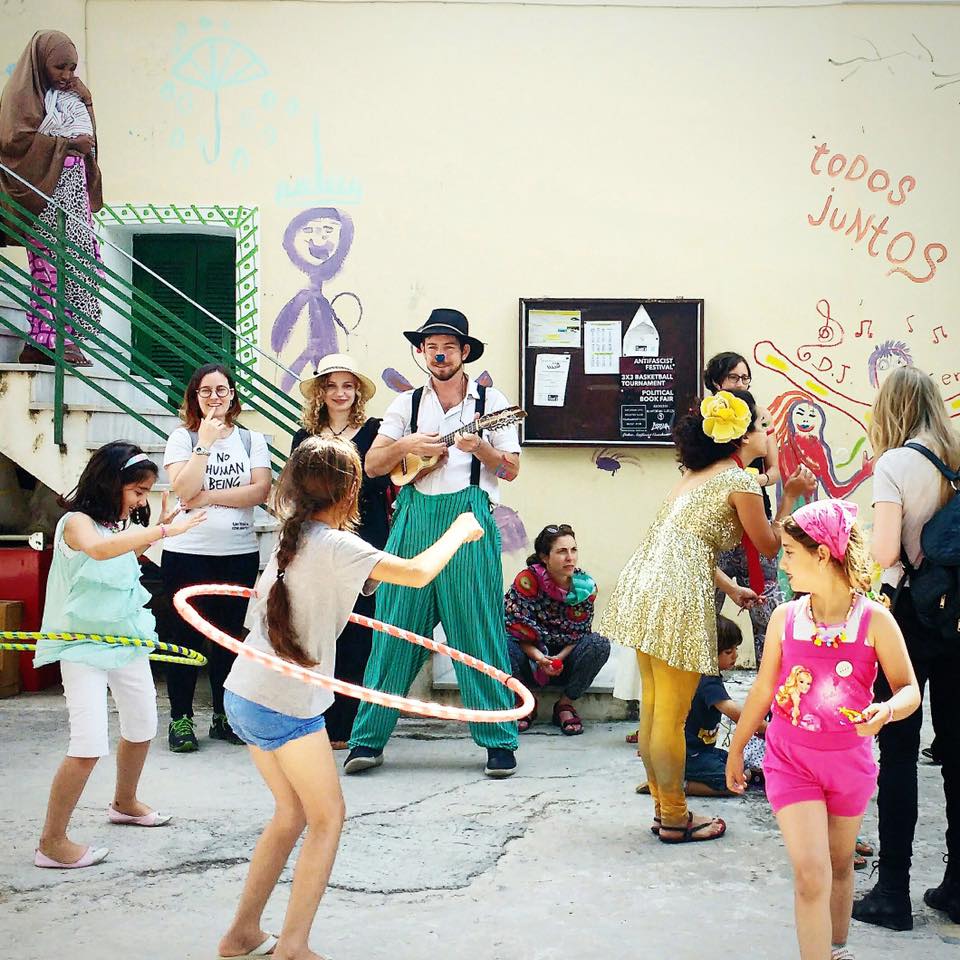 Sabine: May 28, 2017
Lesvos is this beautiful welcoming island that embraced so many desperate people fleeing war and misery hoping for a better life. Some made it, some lost their lives on the way, and some are still stuck on it or on other parts of the route… all waiting…

Every time I come here I get the feeling of never wanting to leave. This time more than ever. I am meeting all those who last year were stuck inside Moria camp and we clowns couldn’t meet because we were denied access.

I’m overwhelmed with feelings of joy and complete sadness. Lesvos is where I learned that love has no limits and no borders. 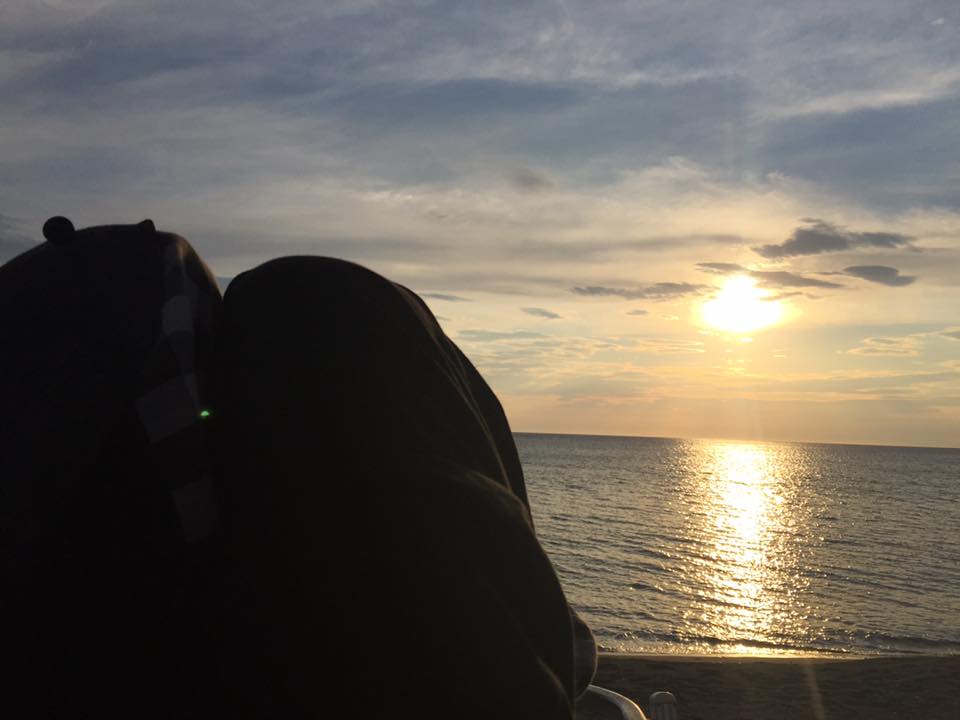 Clay: May 29, 2017
Sabine is such a great clown partner. Who knew a Lebanese and an American clown could get along so easily and bring so much joy to so many refugees around the world. There’s no one I’d rather have spit water in my face. We’re now in Lesvos again and have so many memories. Today we will perform 4 shows for hundreds of deserving humans. 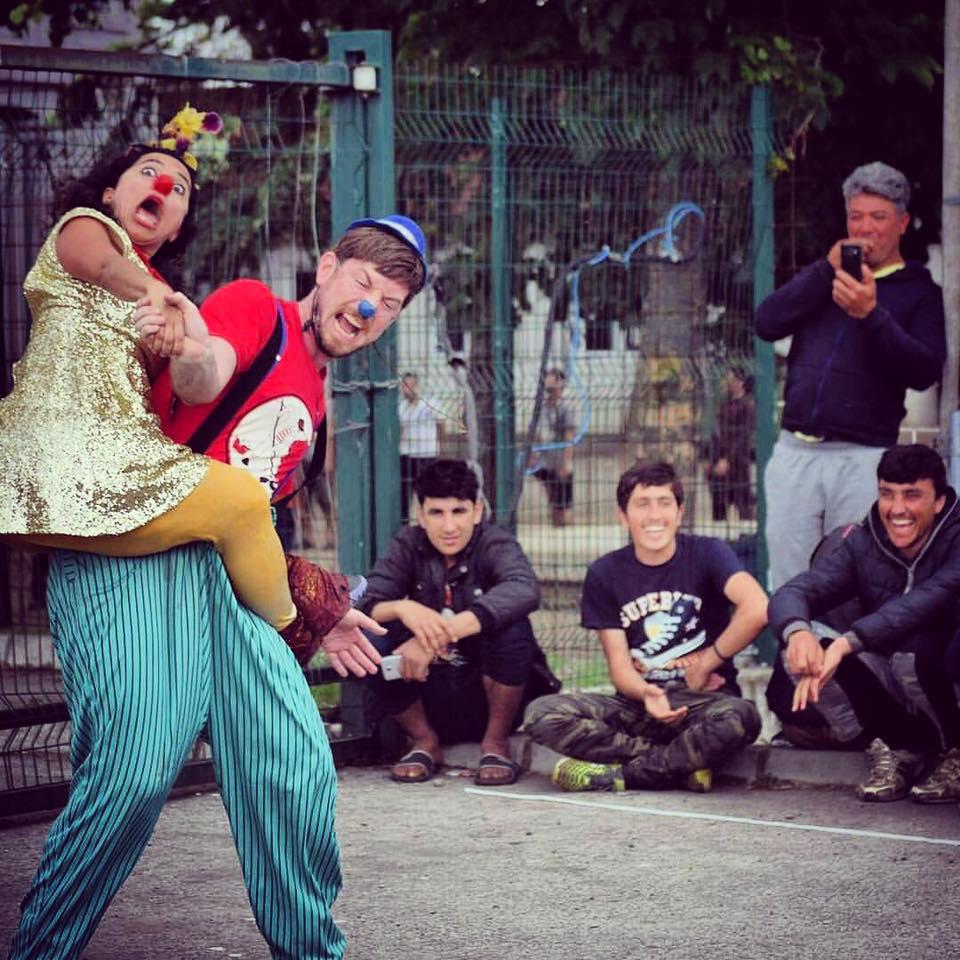 Today the sun is shining and the sea is calm. Our last show at Lesvos was at Karatepe camp where kids followed us dancing and singing and playing music. It was a much needed show for both the refugees waiting to be settledand the team who’s trying to make sense of the harshness of the world after performing on the island for 4 days.

I can’t put in words (just yet) the mixture of this island’s calmness and craziness. Of the beauty of nature and the ugliness we carry within. Thousands of people we met on the road had big blank eyes and big perturbed souls. They’ve been waiting for so long, so long, so long. Longer than their souls can bear, longer than this life can bear.

Thankful to be a clown, always and forever.

Sabine: May 31, 2017
We just got to a hotel where there are mirrors and I saw that I have two new white hairs! I’ve always wanted many because I like them. Now I kind of know that one of them has to do with age but the other one, I’m sure it appeared at that moment when two little girls were following me to the gate of their WIRED FENCED tiny section at the Moria camp, surrounded by police officers and the guard (who’s a volunteer).
He opened the door for me and banned them from coming out.
The 12 year old girl told him “Oh but I am allowed to go out, this other little girl is not”
I looked thinking it has to do with their age! The little girl started screaming, put her hands and feet on the fence and kicked it hard and harder. When I asked the volunteer he said “She’s a new arrival, and new arrivals can’t leave this section for the first 28 days”.
They can’t leave this section or 28 days!
I had to walk away fast, breathless and in total shock. Walking and to my right a little girl is stuck behind a fence shouting kicking and crying.
We came back the following day and performed for the least number of kids ever and it was the hardest show I’ve done in my life. These kids couldn’t focus or stay still for more than 2 min! The show went mostly as such “one clown on stage performing for the adults in the back and 4 team members putting kids back to their place.”

So much for looking forward to having more white hairs… 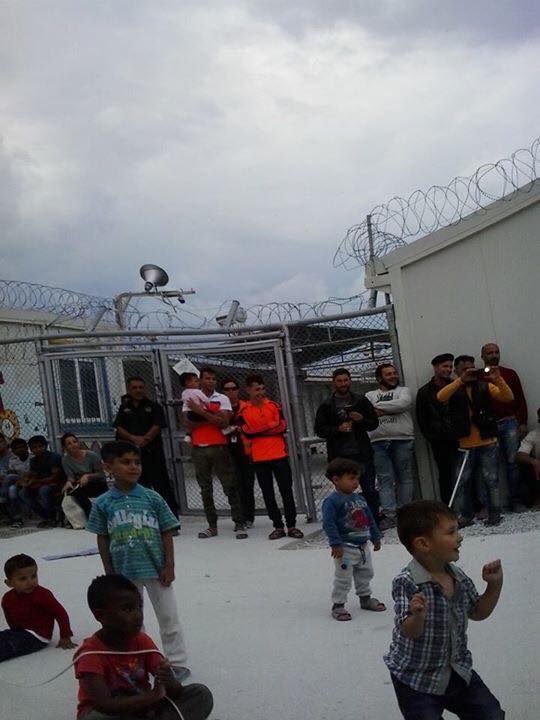