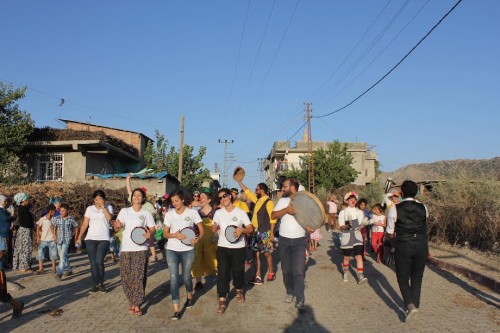 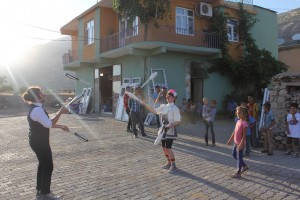 We arrived in Diyarbakir on Monday. Diyarbakir is one of the largest cities in eastern Turkey, and is considered by many Kurds to be the capitol of Kurdistan. We are nearing the end of a week of performances in Kurdish villages and Syrian refugee camps.

Our first show was in Diyarbakir in a park outside a music conservatory that is one of our partner organizations here. Our main contact warned us that the audience might be small and subdued. Few people go out these days, he said, for fear of the rising tensions in town between the Turkish police and Kurdish activists. But he and his logistics team promised our safety, and we set out to do the best possible show for whatever number showed up.

As we arrived, rehearsed, and set up to perform, more and more kids arrived. By show time there was already a good number of people in the park, curious about what would happen. We started the show with a parade. Our appearance alone is striking: 17 of us, a huge, naïve chorus in red noses and ridiculous outfits, clearly from a variety of cultures. When we began playing music, singing, juggling, and dancing, children began ran and danced along. Their parents, we were later told, were meanwhile picking up their phones to call friends to come and see what was happening. The rowdy little crowd grew throughout the show. It took all the energy of the logistics team to prevent all of the children from jumping on stage en masse to perform with us. The energy of the crown lifted some of the newer clowns in our group to a higher level of clowning. It was a promising Diyarbakir debut.

In the following days, we have been traveling out of Diyarbakir to perform in more remote Kurdish villages. These tiny towns have never had shows come to them before. Many of the people we meet have never met anyone from Istanbul, let alone from outside of Turkey.

When we arrived at a school outside the village of Nerib (Kurdish name)/ Kuyular (Turkish name) for our second show on Wednesday, the first order of business was to go into town and ask the local elders’ permission to perform in the village center. A small team of us (the organizer from Istanbul, three Kurdish organizers from Diyarbakir, and me), walked into the village, leaving the rest of the group behind to rest.
As we walked into the village and passed women and children in their yards they stared, but few smiled or returned my wave. First, we met with the village elders. We found them, a group of men in kufi hats, drinking tea in the town square. They stood up, pulled more chairs over, and ordered more tea. They greeted and shook hands with the three men in our group. We all sipped as one of the male Kurdish organizers explained our project. The men listened for a while, then said that this town square was not a good place to do a show. They sent us to another part of town, where we went to sit and drink tea again, this time with the mayor and another group of men who greeted only the men in our party. After two sips of tea, we all stood up to go with the mayor to see a possible place to do the show. 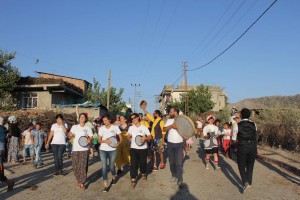 A man stopped me on the way to the door. He asked me in broken English if America was helping the Kurdish people. I found myself wishing I was wearing a red nose – people do not ask clowns political questions. I said, “I can’t say. But I am here, and I want to help Kurdish people by doing a show.” He wanted to talk more, but the others were pulling me out the door. We had a parade and a show to do. And whatever my personal opinions about American foreign policy, I had no more to say about it. Although our simply being there, in a group of Kurdish, Turkish and American artists together, is a political statement in itself, part of the power of a clown show in Turkey is that it is not political. It’s just funny. So many elements of life are political there, from the language one speaks to the clothing one wears to the street one lives on. In Nerib there are two streets: the conservatives live on one and the liberals live on the other. In a village that has seen so much conflict, and where the population is literally divided, an event that brings a variety of people together to laugh together can be radical. Not politically radical – just radical.

We walked back to join the rest of the group, followed by suspicious looks. We soon heard from the men of Nerib that it would be better if we do not perform our show within the village after all. So we set up to do the show at the school instead, put on our costumes, and went out to see how big an audience we could bring back with us in a parade.

I was nervous for the parade. Nerib had not been very welcoming. But my second meeting with the village was entirely different. As the clowns paraded through, women and children stepped out of their yards, smiled, laughed, and clapped with the drumbeat. Children followed along with us, wanting to play. When we passed by the town square I’m pretty sure even some of the tea-drinking men cracked a smile. 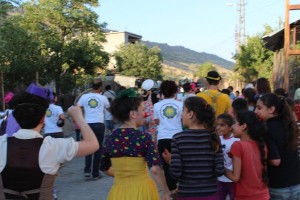 A bit past the town square, we had a moment of fright. A young boy threw something toward us. He was on the street in front of the parade, and the object flew high in the air and directly toward us. For a second, we froze. Was it a stone? Would it be followed by more stones? Time seemed to slow down, or the object seemed to slow down … No, it really was slowing down because it was a home-made toy – a weighted plastic bottle rigged with a plastic bag parachute that caught the air and gave the bottle a long, slow, arched flight: a toy, not a stone. The boy who threw had simply seen our jugglers and wanted to throw things too. Next, he ran over to the jugglers and they tossed juggling clubs back and forth as the parade continued. We danced up the conservative street and down the liberal street, collecting an entourage of children who paraded with us all the way back to the school for the show.

The difference between going to Nerib without a red nose and then with a red nose was astounding. Although it’s good that we went through the steps of drinking tea and asking permissions as we were supposed to, I am so glad we went back again with red noses and a parade.