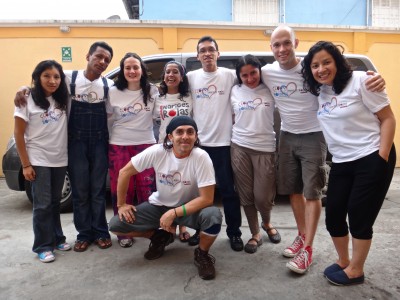 Thanks to our partnership with ACNUR, an office of UNHCR, we have been invited to travel hundreds of miles to distant communities.  Our show began today on the basketball court of Chical’s elementary school.  Although the show was designated for the children of the school by ANCUR, by the end of the show much of the community had arrived to join in the spectacle.

We open each show with clowns progressing on stage, some somber, some very business-like as if they have a very important place to go or something to do.  They pace under the shade of umbrellas around the stage, ignoring a sole clown, Sayda, who has an empty bag and is asking the audience and other clowns for a gift. The group ignores Sayda and the audience smiles at her while she is excluded from the “importance” of the other clowns.  She then breaks into a somber version of “el cielito lindo” and the rest of the group places water bottles on top of the umbrellas to cause a rainstorm.  The crowd laughs as we get wet from the rain and Juan Carlos joins in a beautiful duet with Sayda to open the show.

Sayda’s clown is welcomed into the group after we hear her beautiful music and the show drives full speed ahead as each clown then shows off a minute or two of a funny bit in the style of “chiarivari.”  Two more clowns, Juan Carlos and David, get lost but fortunately they find a map.  They cannot make heads and tails of where they are on the map when Mirella steps into help them.  They disallow her to join in the play and so she becomes ‘el toro,’ a raging bull who successfully steals the map from the two men and runs through the crowd keeping the map from the rest of the clowns.

A chase through the audience with all 7 clowns ensues and the 6 clowns chasing Mirella suddenly disappear leaving her alone on stage.  She begins to cry and two other clowns then appear crying hysterically—the audience cheers and laughs at the clowns crying.  The clowns use large ‘banderas’ as handkerchiefs and as they cry they create a rhythm, then dance with these banderas.  The bandera dance accidentally turns violent after the clowns complete their choreography and begin to hit each other with these flags.  The other clowns, who have been hiding with the children in the audience until now laugh at the mayhem.  Chechi, Sayda, Ale and myself get caught laughing at the other clowns with the banderas and we are quickly pursued by them.

In defense, the three of us form ‘el dragon’ and turn on our fellow clowns. The other three respond by forming another dragon and we approach each other as if we are about to fight.  The only thing stopping una guerra is Ale who finds a container of bubbles. She fills the air with bubbles interceding that we not start a war.  We all start playing with the bubbles, musical saw music fills the air and leads to David catching a bubble and magically turning it into a contact juggling piece.

My clown gets excited about the contact juggling and with this excitement succumbs to a sneezing fit which leads into a series of magic tricks with my handkerchief.  Sayda continues the magic with the paper bag that was once empty, at the beginning of the show.  With the help of the audience she magically makes a foam red nose appear in the bag and resolves the issue of having nothing in her bag from when the show began. We change pace again and Chechi and Ale play through a newspaper routine that transforms a newspaper into a pair of binoculars helping us connect more closely with the crowd.  They find a child who is eager to join us on stage and invite the child to come play.  After a funny routine of trying to bow in harmony with the child we cheer and honor that child with loud applause. We wrap up our show from the energy of having a child be the focus of our last bit and dance and sing as David appears on stilts doing acrobatic moves and amazing the audience with his height and agility. Often quiet at the start of our shows, our audiences have ranged from 60 to 300 people, young and old.  It seems the more rural we are, the more hesitant audiences are to laugh and cheer; yet with each show by the time “el toro” makes her rounds the spectators are playful and holding themselves back from running on stage. As a group of clowns we have witnessed the transformative power of laughter in children, caretakers, even police officers and soldiers.  During our last show a truck full of workers stopped in the middle of the road to watch our antics.  We’ve been invited to visit some pristine areas in the forests here and have witnessed nature’s power in severe thunderstorms and beauty in jagged landscapes and snow peaked mountains.  We’ve also witnessed the extreme poverty of these communities excluded from the Ecuador’s modern society as well as violence amongst community members. Our work here has only begun and I remain happy that our partners in Ecuador, Mirella, Juan Carlos, David, Chechi and Ale are building the skills and connections to keep brining clown work to regions where they are invited.  Daily, we  share tools and ideas to help sustain the laughter in places where the performing arts are not present, where access to entertainment remains minimal if any at all.I am ever grateful to our donors, those who believe in the power of laughter and joy; those who support this work and help us share laughter in all corners.  Thank you for your generosity and love! It is never too late to make a donation to Clowns Without Borders USA to ensure that this work continues.  While here in Ecuador I am working with clowns to help develop a program in Colombia in the next month and we are also in the early stages of building a trip to Palestine.  Can you help us out?