David Lichtenstein writes from the road, during CWB – USA’s 2002 tour to Chiapas. The clowns visited many Mayan villages over the course of 12 days, and were happy to see a small decrease in violence since our most recent tour to the region. 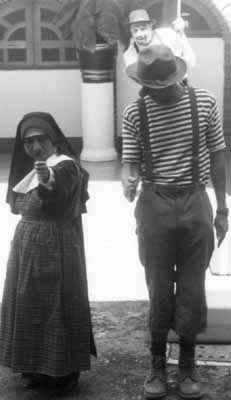 Mercado Benito Juarez, San Cristobal. I perform a solo show for 100 people.
It’s a warm-up show, intended for children at the Indigenous market.

San Andreas Larraizar. I perform another solo show, this time for 200 people.
It’s in the courtyard of the village church—intimate and well received

Acteal, Chamula. I perform a solo show for 120 people. Acteal is a very poor mountainside village, in which 45 campesinos were massacred by paramilitaries in 1997. Many people are elsewhere today, so it’s a small crowd. Lorenzo, a community organizer with the Abejas, (the Christian, Indigenous, leftist organization in Chiapas) arranges for us to go to Yashgemel, where more people are gathered.

We arrive in Yashgemel, at the end of 12 kilometers of bad road. This far off the beaten path, audiences are very shy. They literally sprint away when I move toward them to try and get a volunteer out of the group of approximately 300 people. My kids, James and Lela, have a hard time being watched and followed by the village children, but eventually they start to play a little. Lela spends her ninth birthday sleeping in a barren shack surrounded by animals and coffee bushes. We spend a while helping to sort coffee beans.

We’re in Chenalho, a larger Municipo town, and a PRI town. I chase some state military police in a jeep with my lasso.

Thank goodness the other clowns arrive. It’s grueling to perform hour-long solo shows in the tropical sun, at 2,200 meters (7,000 feet) up in the mountains. Though Rock and Rudi came straight from two days of flying, after working hard at home, we’re scheduled to start driving at sunrise to get to two shows on our first day as a three-clown team.

Us clowns have never performed all together before our first show in La Laguna Jitotol. We’re in a pine-covered region where the people speak Tzeltal, and all 150 members of this timber-harvesting village come out to view our performance. They laugh hysterically, and we have lots of good improvisation. Later in the evening, we perform for a huge laughing crowd in front of the cathedral in Jitotol. Us clowns are well fed by Dr. Severo Hernandez.

We arrive in a tiny village of Carmen Zacatal, after 12 kilometers of bone-jarring travel, standing up in the back of a Jeep borrowed from the church. Everyone from the village and the neighboring areas is here. The characteristic high-pitched laughter of these mountain people is ringing loud and often. At one point a drunk heckler charges into the crowd, screaming and swinging a machete wildly. He is corralled and put into the village jail while the show continues.

In Mexico, school is only compulsory through sixth grade. A village leader tells me that his son attends high school in the regional Municipio town of Jitotol and only comes home once every month or two. It’s only 12 km (7 miles) away, but that is a hot, four-hour walk or an expensive truck ride.

We spend the rest of Easter Sunday closing at Pueblo Nuevo Cathedral. We perform on the alter, with the priests! It’s our first of two nights staying at the Pueblo Nuevo convent, perched at the lip of a canyon. 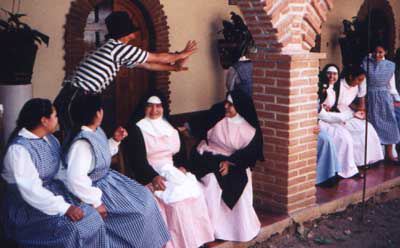