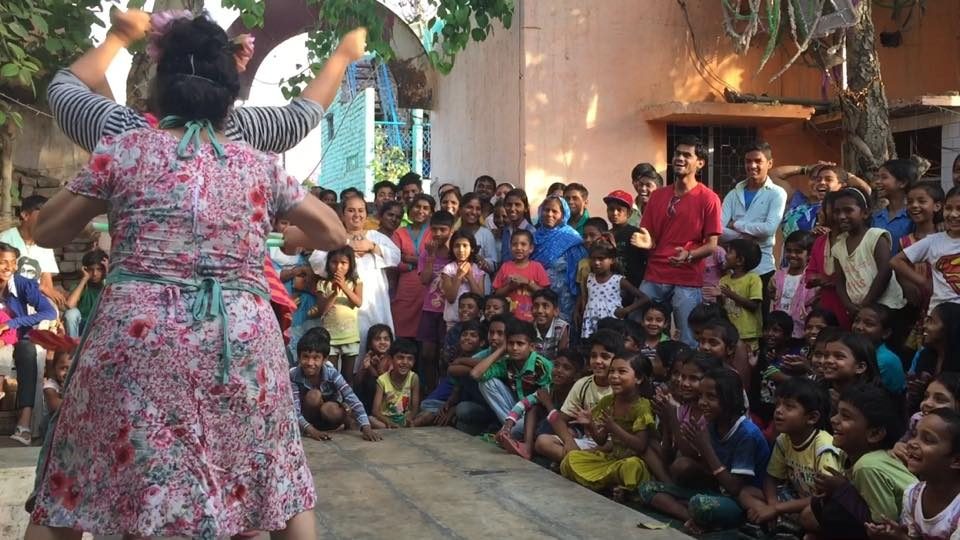 Our journey in India has finished. Four clowns with different nationalities traveled across the north of India for 18 days giving workshops and shows to various communities.

We started our journey in Chandigarh offering a four-day workshop to CEVA Drama Repertory, where we had 18 participants all with some previous experience in theatre and street performance. I was happy to offer a continuity of work that had been started back in 2011 alongside fellow clown, Sabine Choucair.  As for our show, we had a single creation day before starting. Noah from the USA, Sampo from Finland, Sukhmani from India, and Gaby from Mexico. We created a 30-minute show using different personal skills to create acts leaving space for improvisation and connection with the children and audience in general.  We performed at Chhoti Slasha Slum for approximately 200 people. The next day it was at Hamari Kakscha for around 200 children from different communities around Chandigarh. Our last show was in a slum in the industrial area, Colony #4 with the support of the Vatsyalya organization. 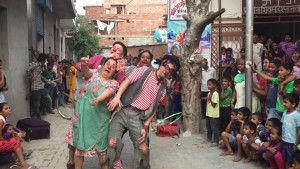 Next up we moved to Delhi. After a six hour drive, we managed the crazy streets of Delhi and arrived at our hostel, Jugaad. We quickly changed and rushed into our next show. This took place at a temple at Kusumpur Pahadi slum for around 50 children and 30 adults. Like after every show, we stayed playing with the little ones for about 30 minutes.

Once we were heading back to our car, we realized our car keys were missing. Noah and Sampo decided to stay close by the car and pulled off a little show that gathered curious by-passers, while Sukhmani and I looked for the keys with no luck. Fortunately, by the time we had given up hope, a young man had found them!

We then started planning our weekend in Delhi as we were having a very intense workshop with the young group, Aagaaz, the following morning. 20 participants from 12 years old to 19 years old.  The workshop took place in the Muslim area of Delhi, and once we heard we couldn’t have the space that had been intended for our use, we decided to go to the park and lead a six-hour workshop under some shade on a scorching day, 42 degrees Celcius, or 107 degrees Fahrenheit.

The next day we were able to lead the workshop in a school, which worked better for everyone.  We then moved towards a very different atmosphere. We visited a center for children with cancer (“Can Support”). Families with very little resources brought their children here. It was a very nice experience of gentleness and playfulness for both children and their parents. After that, once again, the set changed drastically, and we were now giving a show for children in a Library Deepalaya for over a 100 children and some educators. This place was great and children were watching the show from the balconies of a three store building.

Library Deepalaya was our last show as a four clown act.

Now things changed as Sukhmani had to leave the troop of clowns. We were now a trio.  We had heard about entering the red light district in Delhi, but we had no idea what to expect. Once we found the very famous “GB Road,” the biggest concentration of prostitution in India, we were told that things had suddenly changed and that we couldn’t go into a brothel (where we were supposed to perform). Therefore we were taken to a rooftop along one of the streets on the outskirts of the district. The place served as a school for children living next to the red light district and though we had quite a small audiences to the begin with, six adults and three children, we managed to gather 30 people in a tiny room and do an intimate show. Afterward, we stayed for food and beverage with the organizer, Ritu. As soon she saw the show she was convinced it was necessary to enter the brothels. She suggested as much, and we networked that night to see if it was a real possibility.  After several phone calls with no response, the phone rang, and we had good news! The owner of one brothel had agreed on having us over and so; we entered the brothel the next day.

At arrival, we were asked not to take pictures and as the only woman in the group, I was asked to cover up. Luckily our lovely guide and friend, Gyan Deep, had some extra clothes to lend me.  We then went up a very steep and dark stairway, where on each floor we met different women sitting and going on with their normal day.

We reached the final level, and were taken to what seemed to be the tiniest room, only 6 meters square and a single light bulb hanging from the ceiling!!! 9 children, all from different ages, from babies to teenagers, sat on a bed and some of the women on the balconies and corners decided to stay.  We then successfully played a more compact and adapted version of the show and left the place with big smiles, some tears, and our hearts very full. It was indeed a humbling experience. We felt very fortunate to have performed at this extraordinary and in-much-need location as a part of the tour.

After big emotions, we had very little time left to catch our train from Delhi to Udaipur. Of course, as we are clowns, we even thought we could still manage to buy some food to take away. Then realizing there were only 20 minutes left, we decided to run (literally) and find our carriages and finally settle.  We met a nice Krishna, who gave us food from his temple.  Night went by rather fast and by 6 am we were approaching our last destination, Udaipur. 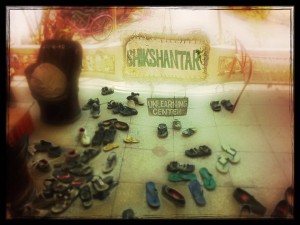 Unfortunately one of our clowns, Sampo, had a high fever, so we rested that day. The next day we were introduced to the Shikshantar community and went straight to visit the biggest hospital treating polio patients in India. We performed for over 300 people and had a blast. It was a very special day, and people were so happy, we stayed for a while talking and taking pictures with them and the caretakers of the hospital.

The next day Sampo still ill, but as we had a visit planned in one big hospital, it came handy, and we all went. Sampo got checked for malaria, but it was only a stomach infection. Meanwhile, Noah and I visited three different wards, maternity, cancer, and general. It was certainly a challenge. It was good to remember that these people are going through something completely different than those we had recently performed for, and it is always necessary for us to adapt and listen.

That night we performed at an open cafe in Shikshantar and then planned out our last workshop together.
The next morning we expected around 20 participants, but 40 people turned up in a small space. All with different ages and various backgrounds creating another wonderful challenge! But we as a team managed pretty well to accept and adapt our work and space together. After the first session we headed towards the lake, it was a Sunday, so lots of people were out and about. It was a special occasion to have a very spontaneous show that by the end gathered more than 400 people.

On Monday, we finished the workshop and also said goodbye to our great and lovely clown Noah, who had to travel to Delhi to take his flight back home. That night, Sampo and I performed in a village for children who work as trash collectors. Once again the troupe was getting smaller, and it was only two of us left. Even so, we adapted the show and had a great time with the children and families in this place. We then sat in a house for tea and biscuits and went back home for a good night sleep as we had to wake up very early in the morning the next day.

At 6 am we had to leave our place to avoid the sun and the tremendous heat wave and make it into one of the biggest dumpsters in Rajasthan. This was a challenging one as it wasn’t part of our schedule but when we both heard of this place we just wanted to go. Children were scattered everywhere, and we only got a chance to play for 7 of them. It was still a meaningful experience, and even the rickshaw driver was so touched that he gave us a discount and said, “nobody ever thinks of these children.”

As it was our final day, we had a good ending and drove for about 2 hours to another village outside Udaipur. This village was known for having communication problems between Muslims and Hindus and so we went and did the show for a mix audience. People were very happy, and we even had a local musician as part of the show! Then…Again two more hours of driving back and yes finally my stomach gave in after Indian driving style 🙂

We want to thank all the organizations, organizers, guides, friends, and hosts for supporting this mission and for the diversity of places we managed to visit. Thanks for all the beautiful food, for making us feel so welcome, and for giving us beds and letting us into your houses. Long live the clowns!
Gaby.