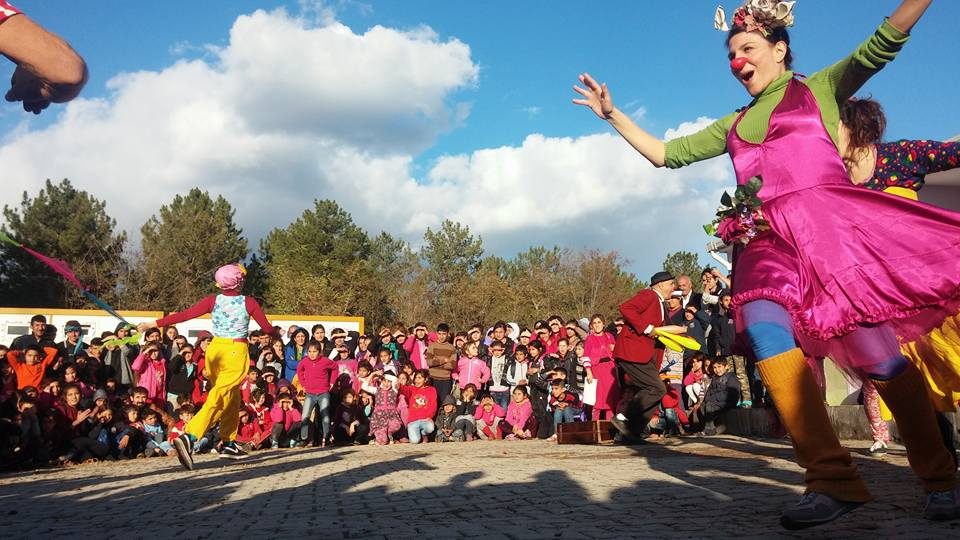 “When are you coming back?” the children asked. It finally came time for the clowns to leave the Antakya Narlıca Life Support Center in Hatay, Turkey and continue our journey. This was the first stop on our 7-day tour along the Southeastern border of Turkey. After Hatay, we headed to Gaziantep, where the children at the Solidarity Association for Asylum-Seekers and Refugees asked us again, “When will you return?” They asked us in Şanliurfa, and in Diyarbakir, in the small village of Şilbêin, and in Suruç where the outdoor stage was covered in bullet holes from a recent suicide bombing attack. Goodbyes are never easy, but on CWB Project Turkey 2015, I found them to be extra tricky.

The transition between places was one of the hardest parts of the trip for me. It always seemed like just as I was starting to feel settled and comfortable in one place, it was time to pack on and move to the next city. We often visited two to three cities per day which was a lot of traveling. Part of me really loved being on the road, the constant movement and change, the inundation of new experiences, people, terrains, climates, and cultures. It was exhilarating. But also, each goodbye with a child seemed to stick in my heart like a fine pin. I never quite knew what to say nor did I ever feel quite ready to leave. 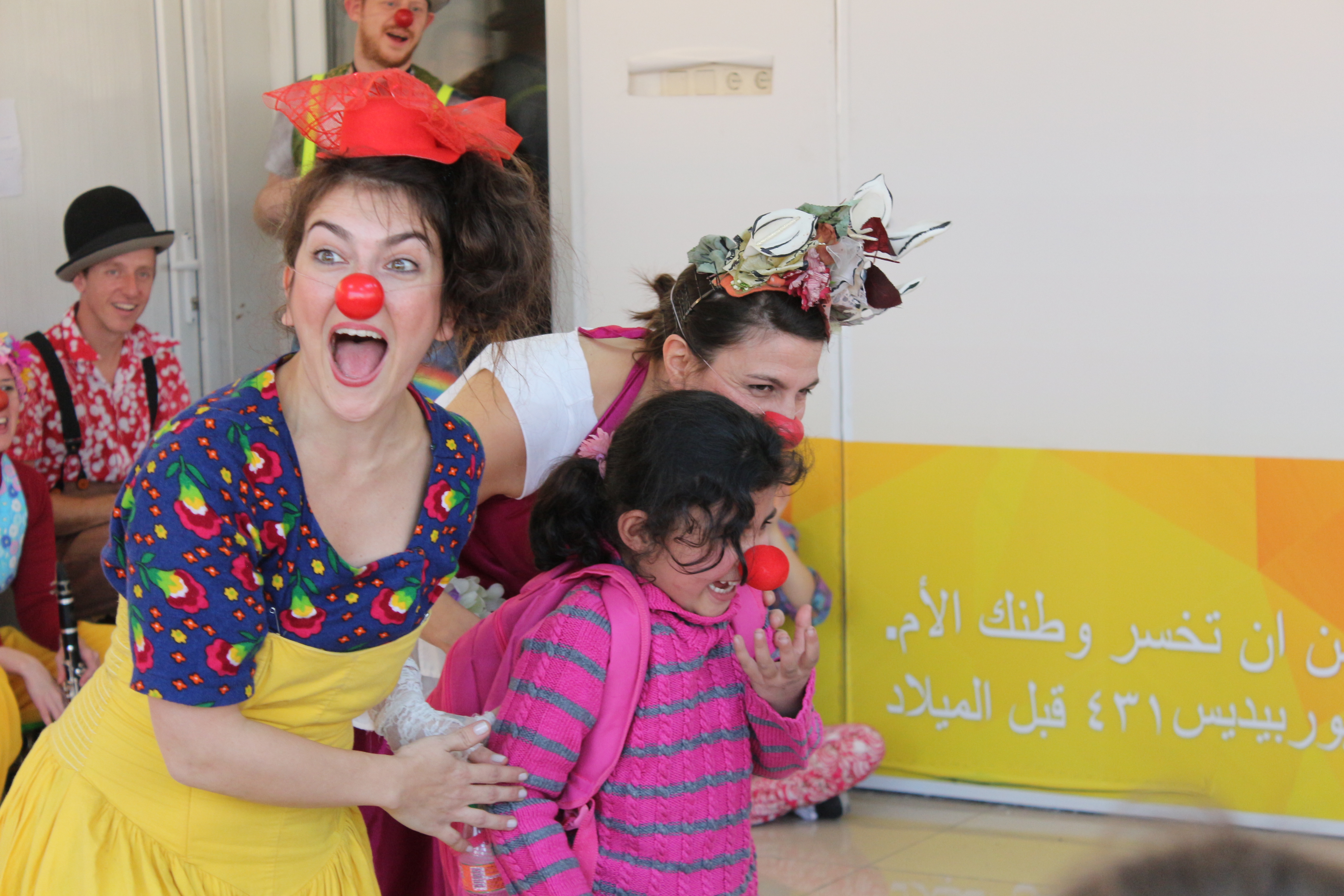 When they asked us when we’d come back, sometimes I answered, “We’ll be back in no time!” in a silly, superhero voice, with a heroic posture and an invisible cape to match. Sometimes I answered, “I don’t know. We will come back as soon as we can!” and then put my arms through my imaginary jetpack and fly around the room at the child’s delight. The children giggled and that helped to allay some of their concerns. Meanwhile, in the back of my head, I’m thinking, “When will the clowns be back?”

It’s amazing how quickly I start to think myself into an anxiety attack. My thoughts cycled and cycled through future uncertainties, and I started to become withdrawn. Would Clowns Without Borders be able to return to Southeast Turkey? (Spoiler: they would! Several times!) And if the CWB clowns did return, where would the children and their families be? Would the children living in the Fidanlık Ezidi Refugee Camp still be there when we got back? And what about our friends at the Amara Culture Center in Suruç where, only five months prior to our visit, there was a suicide attack in the very garden in which we performed? Finally, my thoughts cycled back. I regained some clarity and realized that, with all my worrying, I wasn’t being a particularly fun clown. 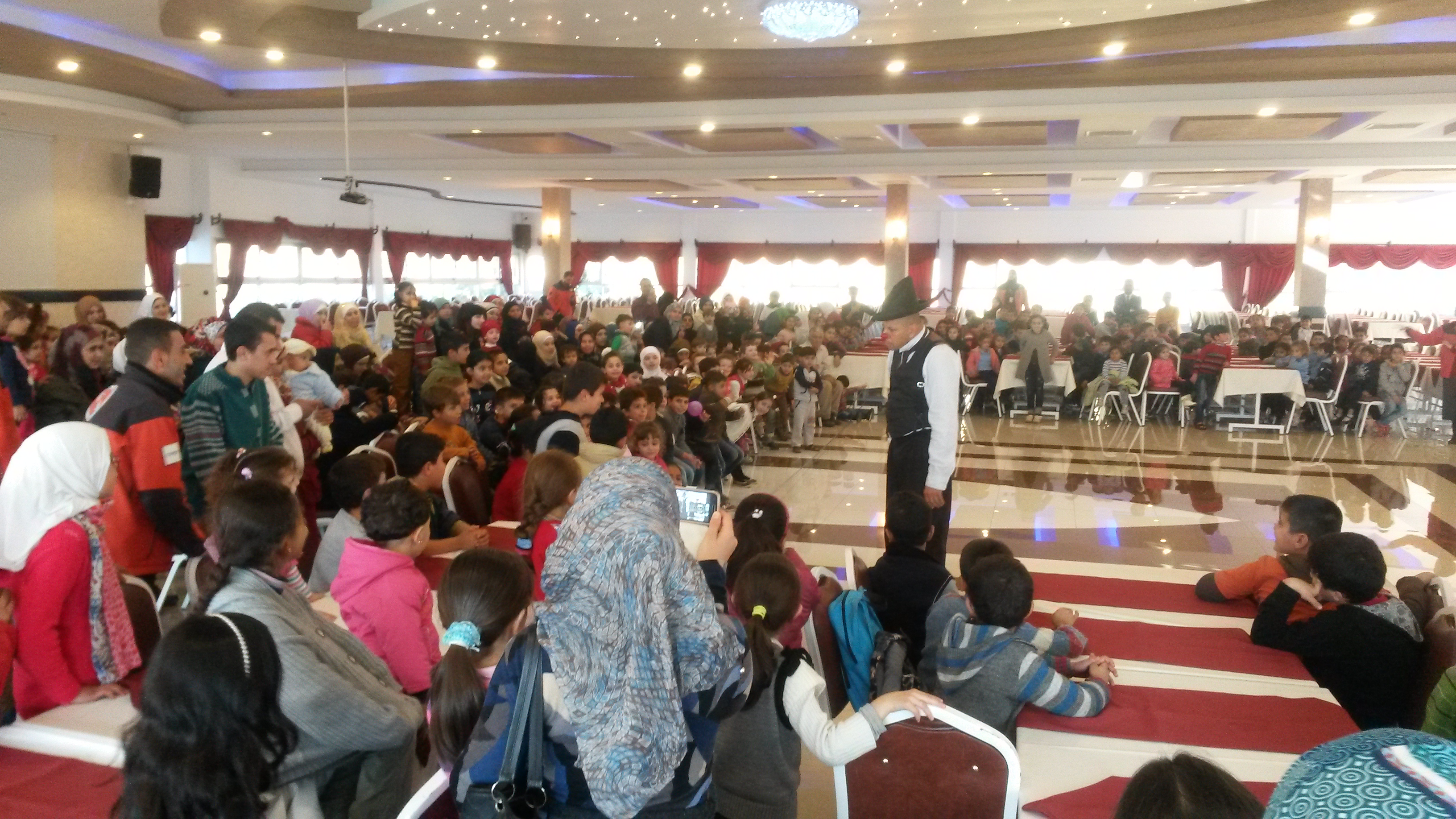 When clowning in a high-stress environment, I can either be crippled by the fear and anxiety, and be absolutely no fun at all. Or, I can be present and playful in my brief moments with the children, and have lots of fun while doing it. I feel like playing is an active choice. By choosing to put on the nose, I’m choosing to play and laugh through all of my fear. When I feel myself start to overthink and get anxious, I take a second to breathe and to remember that every moment of play is a choice. It also happens to be the most fun choice, and the best for clowning. So, I make an effort to go with that one every time. I also try to remember that I have no control over the future. As clowns, I can’t make the problems go away. My magic is being able to bring laughter, play and catharsis to the most tense, tragic or scary situations. My magic exists only in the present moment. That’s all I can focus on. 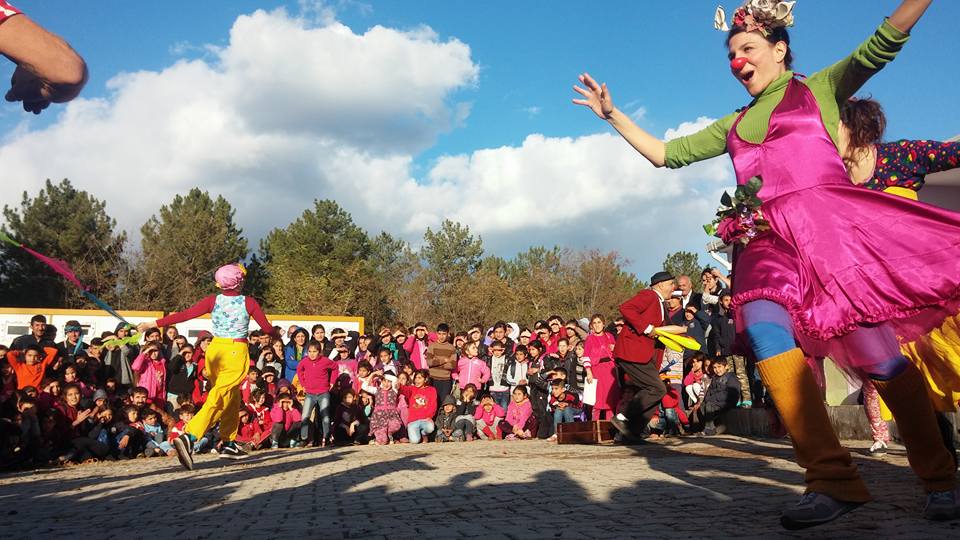 No one knows what the future will bring. Perhaps the memories of the clowns’ visit will fade in the children’s memories. All I have for the future is hope. I hope that, for a moment, the kids I met were able to forget their scary, violent, uncertain realities and just be kids, and feel what it’s like to be free, if even for a second. With whatever the future brings them, I hope that they carry this feeling of freedom with them always. In the end, after the goodbyes have been said, that is all I can wish for.

In happy news, the clowns did go back to Turkey! In July 2016, my beautiful friends and clown colleagues returned to Southeast Turkey to perform for refugee children in partnership again with the Solidarity Association for Asylum-Seekers and Refugees. And now, in happier happy news, the CWB clowns are returning to Southeast Turkey again! Woohoo! I am completely elated! The clowns are coming back!