Six months ago, CWB – USA wrapped our last performance in Myanmar. Over the course of the tour we spent 60 hours on planes, six hours a day in the car, and performed for over 9,000 people. Amidst all those shows (and motion sickness) one moment stands out. 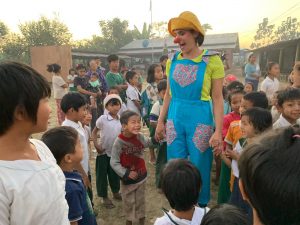 As we drove to our final performance of the tour, I thought, “I’m tired.” I’d spent the break between shows packing and worrying about CWB’s end-of-year fundraising campaign. We were all quiet in the van, taking in our last views of Myitkyina, Myanmar.

Our show format includes a steady parade of volunteers joining us onstage. Anytime a child volunteer comes up, the audience gets more excited. I can feel a little bit of tension, feel the audience wonder, “Will these people make fun of the child?” That’s a fair concern. It’s our job to make sure the child feels supported and validated. It’s our job to make them the star of the show. We have to be worthy of their trust. We invite a chorus of kids onstage for the finale of each show in Myanmar. Together, we say and act out the “Safety Signs.” It’s the moment where the clowns turn the show over to the kids and the kids become the experts.

In our final audience in Myanmar, there’s a young boy with a disability that impacts his motor skills and speech. Throughout the show, he breaks away from the audience and into the circle, momentarily joining us onstage. Sometimes an adult leads him offstage, and sometimes he leaves on his own. There are whole scenes in which he provides the fourth counterpoint to our action. As I approach a section of the audience in search of my final volunteer, the crowd parts to reveal the little boy. He claps his hands and steps forward, but his caregiver holds him back. She’s protective: The earlier volunteers did challenging acts, like holding spinning plates, climbing on shoulders and making foam balls disappear. I make eye contact with her and she looks a little nervous. I feel a little nervous too. I can tell she doesn’t want to set him up for failure. “What if he can’t do it,” we both think. 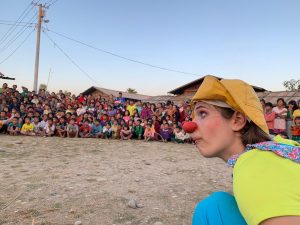 I kneel down toward his eye level and hold out my hand for a high-five. The whole section of audience is watching the two of us. He eagerly taps my hands, giggling and grinning. We do it again, and the audience applauds.

I know that Leah, Andres, Hla Mo, and a whole crew of volunteers are carrying the show for the rest of the audience, but for me, it’s just about this kid. The section of audience where he had been standing is watching and laughing, acting out the “Safety Signs” along with us. When we take a bow with the rest of the volunteers, that little boy receives a huge cheer.

2 thoughts on “Audience of One”