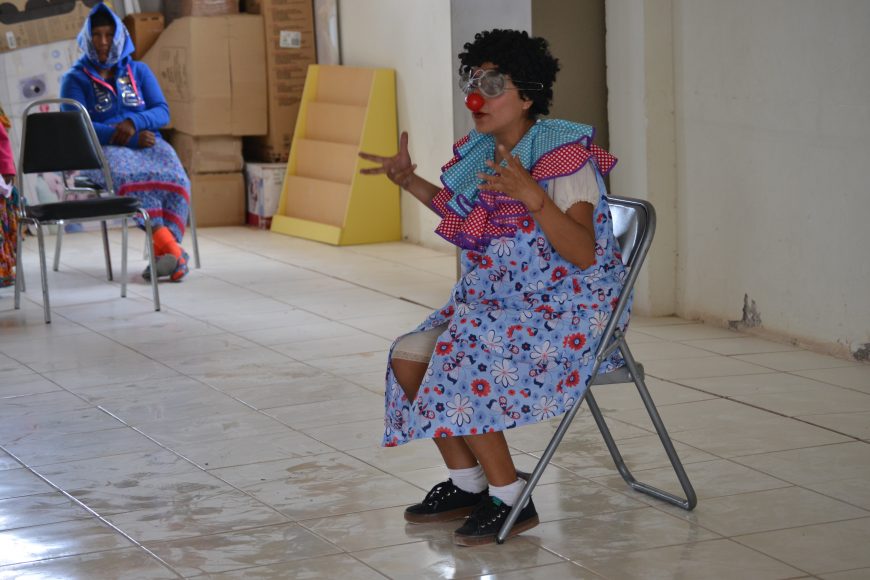 Gratitude is the strongest emotion I feel after the tour. I also feel tired, but happy, and that helps my energy return.

My clown name is Atanasia, which comes from Rarámuri/Ralámuli. One day, I was reading a book about Ralámuli mythology. They say that Onorúame (god) and his brother Atanasio created the world. I think that clowning is similar to creating the world. You create something from nothing. I decided that I want to be Atanasia and make a clown show about the creation of the world. I’ve done this show for 10 years, in many countries. I always dreamed to perform it for the Ralámuli and thank them for helping me create this character.

It was unbelievable to finally have an audience after COVID-19 isolation. I could see them, and listen to their laughter and reactions. It was so special that my first audience was the Ralámuli. Their community was very strong during the pandemic and they protected themselves from getting sick.

Clowns Without Borders shares laughter and emotional relief, but it was important to me that we also bring a message of thanks and gratitude to Indigenous people. The Ralámuli care for their land, and we need to respect, see, and know about them. They face assassination by mafia and violence perpetrated by business interests that want to extract natural resources.

Instead of learning from them, we discriminate against them. It’s hard to understand. They’re right in the way they live, but they don’t fit into a capitalist society. They don’t think about money, they think about the earth. It’s another logic. The Ralámuli don’t say that they’re suffering from discrimination, though. They talk about the way they live, and about their beliefs. Because they’re strong in their beliefs, they’re able to care for the world.

The Comisión (Comisión Estatal para los Pueblos Indígenas) helped us to make sure that we were not reinforcing any kind of discrimination or making any assumptions about the Ralámuli. I asked the Comisión to come see the show and give us feedback. They told us that the Ralámuli are not always asking god for help; they also help god take care of the world. That inspired some of our clown show.

The Importance of Laughter

We met a woman named Lolita who told us that laughter is very important to the Ralámuli. She said that sadness is part of life, but it can also make you sick. Happiness can take you out of sickness. The Ralámuli believe that god is part of everything, so when you make someone laugh, you are also making god laugh. It’s important to me that we care for people who care for nature. As clowns, one of the ways we care for people is by sharing laughter with love.

I always want to talk to the audience after a show. You can see their beautiful faces and listen to their laughter during a performance, but afterward is when you really build bridges of communication. When CWB worked with Jesuit Refugee Services in Ecuador, they asked us, “How do we send a message of inclusion?” And then when they saw the clowns, they understood that the clowning is a message of inclusion. It’s a great way to communicate. When you talk with people afterward, you can understand what parts of the show were important to them and also listen to their stories.

We spoke to Esperanza, her children, her cousin, and Esperanza’s 70-year-old mother after a show. They told us that they heard on the radio that a clown show would happen in Norogachi Community, so they walked three hours through the forest to join the show. We also learned that the Ralámuli don’t consider that kind of walk to be a hardship because they like to be in the forest. It was their first time seeing a clown show, and they liked it. For me, it’s not just clowning as performance. This is payasería como hermosa humanidad .