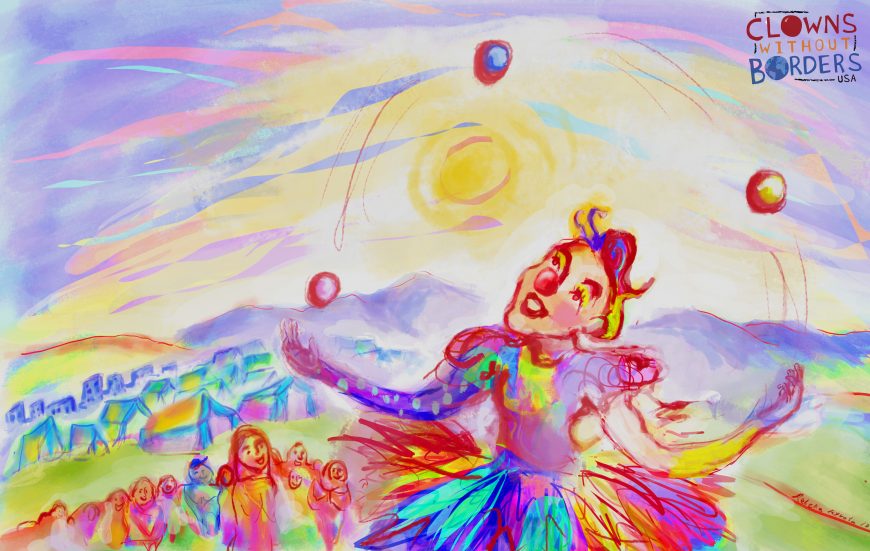 Manfred Max-Neef, a Chilean economist, postulates that across all cultures and societies, humans all have the same needs. And unlike Maslow, Max-Neef argues that these needs are not hierarchical, or in other words, the need for food is just as important as the need for affection, because if one is valued higher than the other, poor outcomes will follow. We recognize that food, water, shelter, and security are vital, but we believe that joy, happiness, and laughter rank very high on that scale, even when they forgotten by those who suffer.

Refugees leave behind everything to seek refuge because everyone has the right to live. It is not ideal to travel to lands unknown and place yourself at the mercy of others.

For those thrust into prolonged, life-threatening situations, each day adds thick layers of stresses that pile and compress like a fault line. It’s the lack of release; the inability to blow off steam; the monotony of daily existence; the familiar routine that has evaporated and the madness of it all that often brings terrible anxiety.

Interrupting the flow of this viciousness is imperative. A small dose of relaxation and a spoonful of play go a long way in feeding the human spirit and helping a person face another day.

hysiological, mental, and spiritual fulfillment. What happens in the long minutes of the day as refugees wait for the next unknown move in their life? How do they find the quiet solitude to process the hardships they have already faced, before encountering the next set of
rials?

Moments of release come in the form of play. Clowns Without Borders artists use humor to alleviate the dreadful suspense of hardship. Children watch a show, interact with the clowns, and then continue to mimic the antics after the show finishes. Listen
to what happened in South Africa some years ago.

We returned the following year to continue our work with SOS. Everywhere our artists went, the kids repeated the acts the clowns had performed for them the year prior! The kids, captivated by the shows, had absorbed what they saw and did during their time spent with the clowns, and then replayed it.  Long-term mechanisms for relief exist in playfulness. This phenomenon has happened in other country locations across the globe. It is an indicator of the positive impact of our mission. Or, as Emmanuel from the Malakal VISTA team (Project South Sudan 2017) says about us, “It’s a

ctivities like this that make me proud to do my job.” Emmanuel is a lawyer who has been to Washington DC to speak to Congress about the situation in South Sudan.

The need for humor and laughter is real. For us, it’s the best way we can help the world, especially those in suffering.