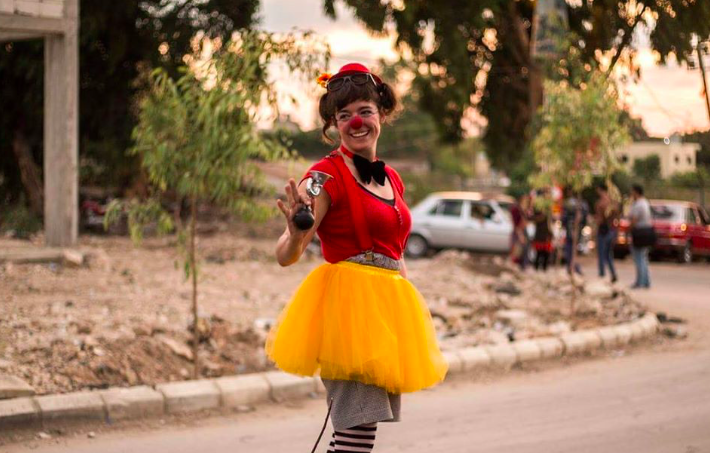 In this series, CWB – USA interviews artists and educators about their experience in clown and circus school. First up, CWB’s Communications Director Nicole Loeffler-Gladstone talks to Hannah Gaff, a graduate of Dell’Arte International School of Physical Theatre and a faculty member at the Clown Conservatory, part of Circus Center in San Francisco.

Nicole: When did you first go to clown school?

Hannah: I attended the one-year program at Dell’Arte in 2008–2009. It’s a physical theater training program and clowning was one part of it. At the time, the director was a clown, so it was the basis of his teaching. I was accepted into their MFA program but decided not to go because I wanted to start making my own work. I went back five years later to finish my degree.

Nicole: Why did you choose Dell’Arte?

Hannah: I went to Dell’Arte straight out of undergrad. I loved theater, but I didn’t want to enter into the whole audition, memorizing lines thing. It didn’t appeal to me. I chose a physical theater school so I could create my own work and break out of the box I was in, the roles I was allowed to play. The physical aspect was the access point. It served as a tool for storytelling that bypasses the intellectual. My experience at Dell’Arte kind of blew my mind. I started to understand what it might mean to be an artist and not just an actor. I started to understand my strengths and where I needed to grow. I saw the potential of live performance and how much it can impact people.

Nicole: But you decided not to stay and pursue the MFA at that point?

Hannah: I felt like I couldn’t absorb any more information until I went out and made my own work. I moved to NYC for a year, but it wasn’t for me. I moved to California, started a theater company, and learned a ton. I began to understand what I was missing and I developed a vision for the impact I wanted to have. I knew if I studied at Dell’Arte for two more years, I could develop those tools.

Hannah: Dell’Arte, is an ensemble-based physical theater school. The Clown Conservatory is, at the moment, six months of training set up on a part-time schedule, and it’s specifically clown. They call it human cartoon. To my knowledge, it’s one of the only places where you can study clown on its own.

Nicole: What do you love about the learning environment at Clown Conservatory?

Hannah: There’s something really important about an intensive setting for learning, because you put in an incredible amount of energy and there’s less of a barrier to full immersion. An intensive setting, like a conservatory or degree program, asks you to fully show up every day. It’s great to see how students develop a perspective on the kind of work they want to make, their strengths as a clown, what they want to say in the world, what it means to craft a story, what they want their audience to feel, and how to be with the audience.

Nicole: What advice would you give someone who is trying to choose a clown school, or is wondering whether formal training is right for them?

Hannah: It can be really helpful to write out who you are as an artist. What compels you to be a clown, what pushes you to make that commitment? What do you hope to discover? Do you want to take a class to see what it’s like? Or do you want to create work? It’s never too late, and Dell’Arte sometimes prefers to have older students because they come in with their own perspective.

Nicole: What’s one thing people can expect to gain from clown school?

Hannah: You should be prepared to develop tools of vulnerability. Clowning parallels life, and it’s really transformative. It helps you learn about yourself.

Learn more about the Dell’Arte International School of Physical Theatere, and Clown Conservatory at the Circus Center