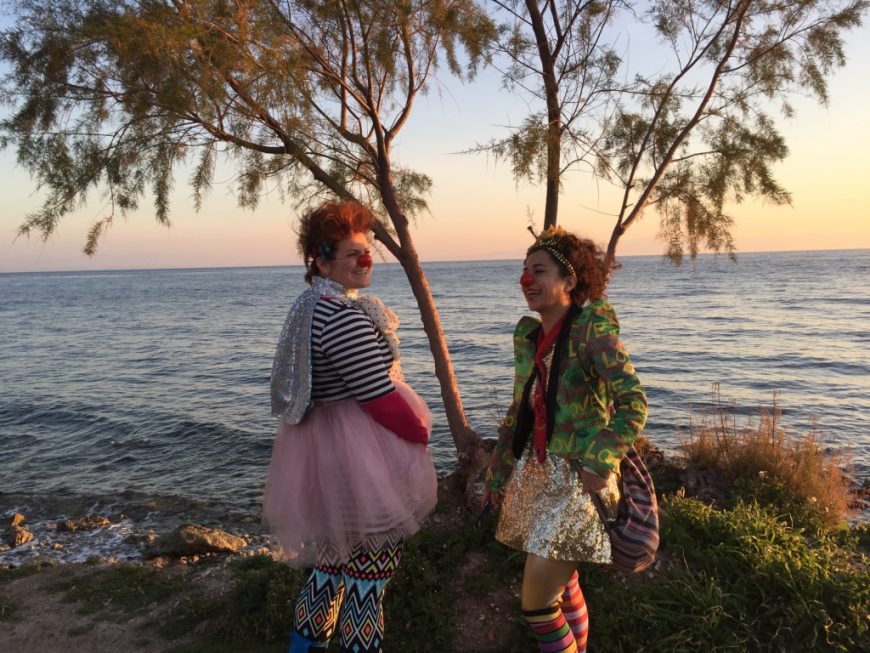 With hard work, commitment, and a funny-bone, anyone can be a clown. But, CWB – USA knows that certain histories aren’t as widely shared as they should be. Guest writer Beth Grimes draws on her encyclopedic entertainment history knowledge to talk about just how prevalent female clowns really are.

The history of women and femme-identifying clowns is richer than some may imagine. What follows is only a smattering.

Women were jugglers and acrobats in the courts of ancient Egypt, as depicted in tomb paintings from around the year 2000 BCE. They portrayed comic roles in ancient Greek theater, including Phylax comic theater, dating back to the 5th century BCE. Women were even fools and jesters for European aristocracy until the 16th century AD, when the church began condemning their roles in theater and comic entertainment by deeming it immodest. “Jest books,” or books of jokes and quips written by men, became popular during this time, redefining the role of a woman in comedy by her ability to laugh at a man’s jokes rather than tell a joke herself.

Female comics turned to the stage with commedia dell’arte, a campy, comical theater form that was free from theological regulation. It was through this medium, originating in the 16th century, that the modern “clown” began to take shape.

The 18th century saw the birth of what we call “circus,” beginning with Phillip Astley’s Royal Amphitheater in London, in 1773. In 1846, The Royal Amphitheater provided a venue for the first performances, and subsequent newspaper mentions, of “female clowns.” Twelve years later, Amelia Butler was considered the first female circus clown in the United States. More names begin to trickle in: Mlle. Emille with Alhambra Circus (1863); Mlle. Silvia Christoff, “The World’s Only Female Clown (1867); and Ada Isaacs (1869) were the toast of Europe for over a decade. By the end of the 19th century, women were proving that they could indeed tell a joke.

From 1895–1899 circuses held bidding wars over lady clowns. In 1895, Evetta Matthews (sometimes billed as Evetta Williams) was hired by the Barnum & Bailey show to be a “lady clown” headliner, a previously unheard of stunt. Evetta stated, “I believe that a woman can do anything for living that a man can do, and do it just as well as a man. All my people laughed at me when I told them that I was going into the ring as a clown. But they do not laugh now, when they see that I can keep an engagement all the time and earn as much or more money than they can in other branches of the business.” The tour was such a success that other circuses began to compete over how many lady clowns they could have on their bills, some boasting as many as four. The gender imbalance remained, since some large circuses at that time had 30 clowns or more.

The English music halls of and the American circuit provided other venues for female comics. Some dressed as, or presented themselves as men, even centering their routines on proper ways to treat women. They dubbed themselves “mashers” and were the godparents of modern drag kings. Others were literal mothers to famous comics. Silent comic Buster Keaton’s mother, Myra, was the first female professional saxophone player and also a champion physical comedienne.

Vaudeville gave way to the dawn of film, and women began to own the screen as well as the stage. One such comedienne, Gale Henry (also known as the inspiration for the character Olive Oyl, formed her own silent film company in 1916 and eventually starred in over 236 comedies from 1913–1933. Her films were ahead of their time, dealing with gender roles, exploring the possibilities of women running the city fire department (Her First Flame, 1919), and running a detective agency (The Detectress, 1919).

The advent of sound brought the dawn of television. Lucille Ball, Carol Burnett, and Gilda Radner are just a few drops in the proverbial ocean of commediennes who found fame on TV. Phyllis Diller, a stand-up comic who became a household name through television, wore gloves to designate herself as a clown. She stated “I had to wear gloves because all clowns wear gloves.”

These pioneers set the stage for the women clowns of today. Just to name a few: Iryna Ivanytska has gained world acclaim, with her wild wig and fuzzy shoes, as lead clown “Boom” in the theatrical clown show “Aga-Boom”. Pepa Plana of Catalonia helped develop Cirque du Soleil’s “Amaluna”. Her theater shows range from clown interpretations of classic works of literature to political statements on human migration. Gardi Hutter of Switzerland is famous for her washer-woman clown, and specializes in characterizing “female non-virtues,” tossing poise and beauty aside while still conveying a sense of artistry. Amanda Crockett is a physical comic based in Chicago, Illinois, who incorporates juggling and trapeze into her acts, and is a definitive modern vaudevillian.

There are as many women of comedy as there are stars in the sky. We continue to prove that we, indeed, are funny, and always have been.