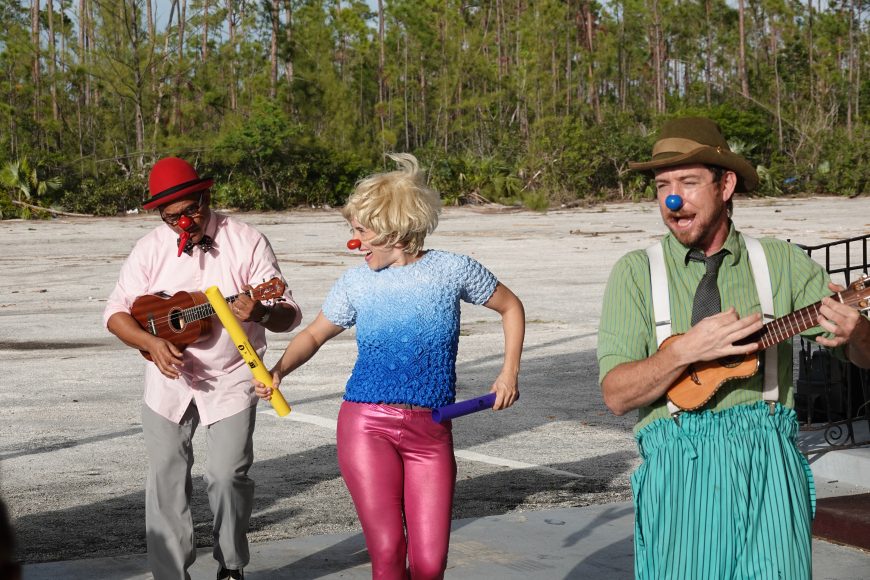 Leora Sapon-Shevin went on her very first CWB – USA tour this past December. The team, which included Meredith Gordon and Clay Mazing, performed for communities affected by 2019’s Hurricane Dorian, a Category 5 storm.

Leora sat down with CWB – USA Communications Director Nicole Loeffler-Gladstone to talk about her first tour and the magic of social clowning.

Nicole: How and why did you start clowning?

Leora: I started clowning because I heard about Clowns Without Borders, and I saw a CWB video. That’s why I went to Dell’Arte.

N: So you were inspired by CWB and then you were finally able to go on a tour?

L: The 2019 tour to The Bahamas was a dream come true and a dream realized. It lived up to every expectation.

N: What drew you to clown in the first place?

L: Clowning is so magical. I love that magic space between a performer and an audience member. We’re two humans entering into a vulnerable space where anything can happen. Hierarchy is a barrier to connecting with others because it denies both parties their sense of humanity. That vulnerable space allows status to dissolve. In social clowning, there’s a real sense of presence, of openness to what others are offering.

N: Tell me more about The Bahamas tour.

L: Meredith Gordon, Clay Mazing, and I toured to The Bahamas in the aftermath of Hurricane Dorian, a Category 5 storm. First, we went to Nassau, the capital, which had not sustained any damage and was sheltering people evacuated from other islands. We didn’t know the exact situation of many of the people at the shelter, but the aid workers discouraged us from taking photos and doing shows outside. People at the shelter might have been afraid to leave because of their immigration status.

[Editor’s note: Many evacuees in Nassau were Haitian migrants from the islands of Great Abaco and Little Abaco, which were devastated by the hurricane. After the storm, the Bahamian government moved to resume deportations.]

N: What was it like to step into a post-natural disaster reality?

L: It was really comforting to know that we were invited to perform by members of the community, and that they knew we were coming. We could trust that they wanted us there. This felt especially important for me as a white person going into communities that have experienced colonialism and oppression by people who look like me.

N: This might be impossible to answer with words, but how do you assess whether a specific audience is interested in a clown show when they’re reeling from disaster?

L: It’s important to realize that people might not want what you’re offering, or don’t want it at that moment, or that you’re stepping on someone’s toes. When you enter the space as a clown, you know that what you offer might not land. You make that offer and try not to run away from discomfort. You also have to be able to leave at the right time. A lot of successful clowning is reading your audience, being open to other people suggesting things, and letting go of control and expectations.

N: What is it like to interact with kids versus adults?

L: It’s easier for kids to jump right in and access play, because that’s their realm. When you have a mixed audience of adults and kids, the adults will help the kids find a way into the “performance” format, but they often see it as geared toward children. I want to connect with the adults when that happens, because they need it more. They put on a brave face during crisis situations, when being able to play might feel like a luxury, or inappropriate—like they’re taking something from their child by playing. But parents and caregivers are carrying a specific kind of heavy load. It can be really liberating for a child to see an adult doing something silly or playful. It can convey that basic needs are met, that the foundation is stable. If an adult is willing to put energy into play, it signals to the child that there’s something to look forward to as they get older.

N: What do you have to say to people who think clowns are weird or scary?

L: Clowns exist within their own logic and that’s one of the reasons they’re so powerful. They’re operating outside of the norm, which can be very liberating or very threatening. We’re afraid of things that feel powerful, so it doesn’t surprise me that the “scary clown” trope is popular.

N: How does “clown logic” help in crisis situations, when everyday life might feel totally abnormal?

L: Clowns have an ability to offer a different perspective. It makes me think of how a clown can defuse a tense situation by “misunderstanding” what’s happening. Because clowns are outside of social norms, they can see difficult situations as a game. Communities have a social understanding of how situations evolve under tension, and a clown can interrupt that trajectory by purposely misinterpreting it, piercing the tension.

2 thoughts on “Hierarchy Is a Barrier”