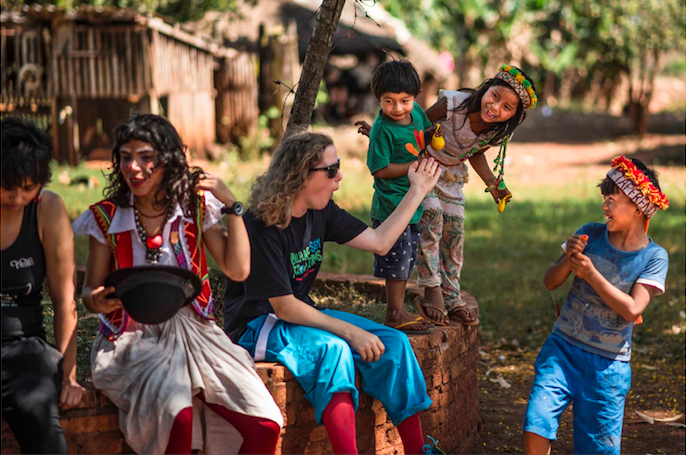 This fall, CWB – USA travels to Matto Grosso do Sul, Brazil sharing laughter with indigenous Guaraní communities facing displacement due to agribusiness incursion on their land. Less than 1.6 percent of Matto Grosso do Sul has been demarcated as indigenous territory, which would theoretically protect the land from industrial development. When indigenous people are prevented from practicing their cultural on their lands, it can be a human rights violation and form of internal displacement.

The UNHCR released 2018’s total number of forcibly displaced people and the results were sobering and staggering: at least 70.8 million people displaced. Out of that total number, 41.3 million are IDPs or Internally Displaced People.

Internally displaced people are those who flee violence, conflict, natural disaster or human rights violations, like other displaced people. But IDPs remain within their national boundaries, often beyond the reach of aid or other resources. CWB – USA frequently performs for IDPs, whether they are affected by political conflict, natural disaster, or both.

Indigenous people, who have survived centuries of colonialism, are particularly vulnerable. The United Nations Declaration on the Rights of Indigenous People states that indigenous people may not be relocated without their free, prior, and informed consent. However, the UNHCR definition of IDPs does not automatically include indigenous people, most of whom have been actively displaced off of their ancestral lands.

For many indigenous people, connection to land is more than a matter of livelihood—it holds essential cultural and spiritual meaning, as well. The struggle toward indigenous self-determination is a struggle against internal displacement perpetuated by colonialism. It’s also a struggle on the front lines of the climate crisis.

Two and a half billion people rely on indigenous or communally-held lands for their livelihood, amounting to approximately 50 percent of land on earth. Yet these people legally own only one-fifth of communal and/or indigenous land. The Intergovernmental Panel on Climate Change weighed in, with a report supporting land-tenure security for indigenous and commonly-held lands because they are a significant carbon sink, less likely to be deforested, and more.

In August, 2019, internal displacement and indigenous self-determination took center stage in Brazil and Mexico. The Zapatista community in Chiapas announced a major expansion of their autonomous territories. CWB – USA has a long and warm history with the Zapatistas, starting in the mid-1990s when the communities were engaged in armed struggle against the Mexican government. Simultaneously, the world looked on in horror as parts of the Amazon rainforest burned. Fires have increased 83 percent since last year, and are likely started by farmers and ranchers looking to clear land. Though the fires will certainly cause an unimaginable loss of rainforest biodiversity, they also destroy the homes of indigenous communities dedicated to defending and cultivating their land.

CWB looks forward to working with the resilient Guaraní people and learning more about their ongoing fight for self-determination.