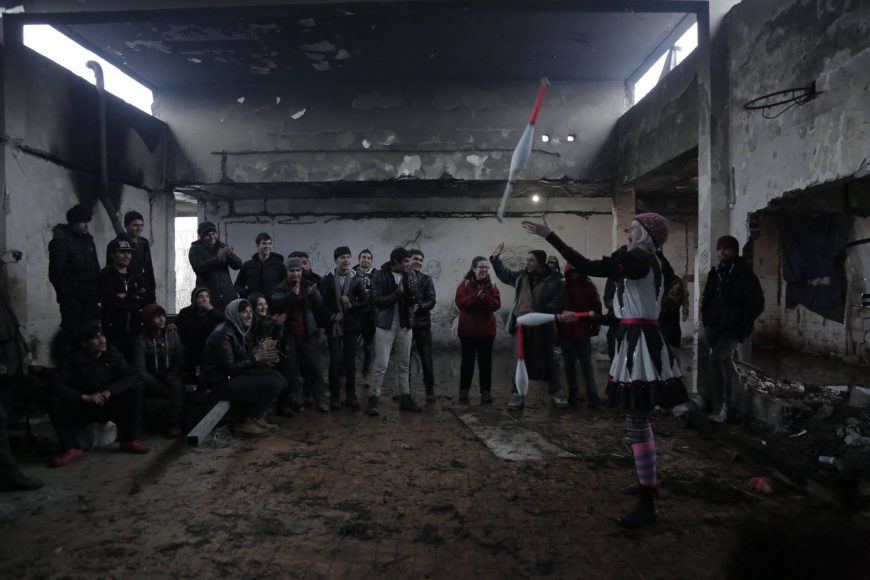 The UNHCR estimates there are 68.5 million forcibly displaced people worldwide: 40 million internally displaced people (IDP); 25.4 million refugees; and 3.1 million asylum seekers. There are also an estimated 10 million stateless people, or people who are denied nationality. In these terms, “displacement” means someone who is forcibly moved or removed due to armed conflict, violence, human rights violations or natural/human-made disasters. Displacement mobilizes CWB into action because our tours respond to people experiencing crisis. When a project partner asks us to come share laughter, we do our best to oblige. But as global politics shift and change, late-20th century and early-21st century displacement has started to take on a distinct quality: protraction.

Thanks to our news cycle in the United States, it’s easy to picture acute crises like earthquakes or bombings. It’s more difficult to conceptualize protracted displacement caused by intersecting problems like lack of water resources due to agricultural mismanagement and climate change, or civil war resulting from the legacy of colonialism. The UNHCR defines protracted displacement as displacement for five years or more, yet from 1974–2014 fewer than one refugee crisis in 40 was resolved within three years. In fact, more than 80 percent of all refugee crises lasted for 10 years or more.

How does CWB respond to protracted displacement?

CWB frequently interacts with communities experiencing protracted displacement, including our 2018 tours to Colombia (Coastal Tour and The Department of Cauca), Lebanon and Myanmar. The media image of refugee camps does not reflect reality for many people experiencing protracted displacement. It’s an increasingly urban and dispersed phenomenon, with (in 2015) at least 59 percent of all refugees living in urban settings. The increasing frequency and length of protracted displacement results in migrant and IDP situations that challenge preconceived ideas of what a crisis looks like. For example, many refugee camps are essentially settled, with established systems of support both formal and informal. But does that mean people no longer live in crisis? What kind of role does laughter and levity play in situations that feel intractable instead of sudden?

We’ve found that, along with planned performances, CWB tours help carve out space for communities to come together over joy. Communities constantly build their own resilience, but play and silliness help reinforce an opportunity to forge connections within protracted displacement.